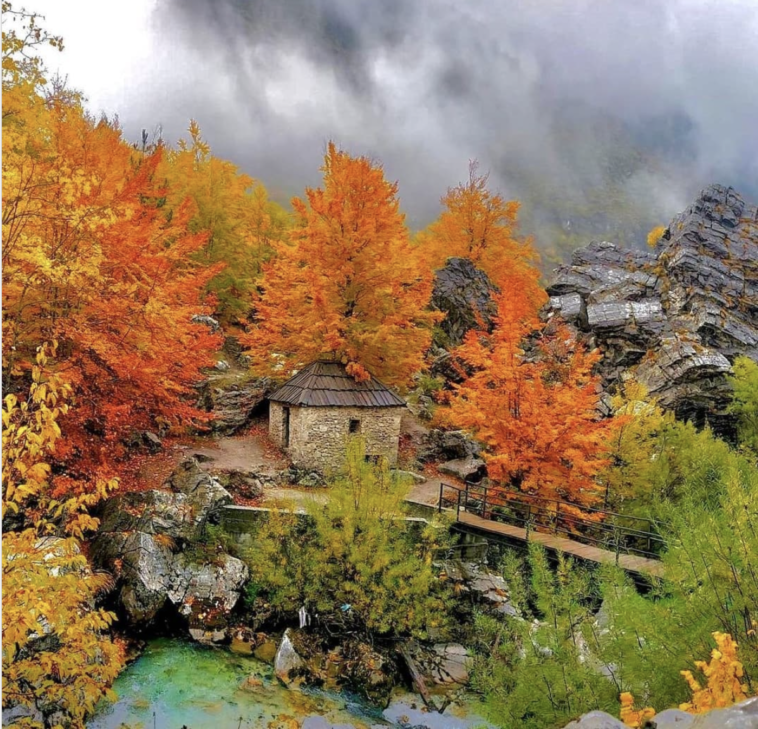 The first rains of autumn are a notice that the golden days of falling leaves are near.Long evenings reading books, gray mornings and warm soups at the table are also close. Finally, the time of romance has arrived!

Wondering where to go to see the spectacular moments of nature’s face changing?

These are our recommendations for you: 10 Best Places to See Fall Foliage in Albania

Qafshtame National Park (also Qafë-Shtamë) (Albanian: Parku Kombëtar i Qafshtamës) resides in the edge of the mountain chain north of Tirana, about 22 kilometers east of Kruja. The park is named after the Qafë-Shtamë passage, and has an area of 2000 hectares, with a beautiful mountain scenery consisting mainly of pine forests, some small lakes and major water sources. November is the best month to enjoy the foliage in this park.

Shebenik – Jabllanice National Park is a protected national park located in the northeastern part of the Librazhd District, Elbasan County in central Albania. The park covers an area of 33,927.7 hectares and shares a border with the Republic of Macedonia. Elevations in the park vary from 300m to over 2,200m at the Peak of Shebenik Mountain, which, along with Jablanica give name to the park. The park is one of Albania’s newest, created in 2008. Late October to November is the best time to se the foliage in this destination. It’s better enjoyed if camping.

Valbona National Park, also called the Albanian miracle of Alps, is a part of the Bjeshkët e Nemuna (Prokletije Mountains). It lies between high and craggy peaks bordering Thethi National Park, Gashi River, Plava and Gucia (Montenegro), all strictly protected natural areas. It is a transboundary park (Albania/Montenegro) with the highest biodiversity value of the country’s mountain mainland. This park is also referred to as the Gem of Albania. You gonna enjoy a spectacular view no matter the season, but autumn is a great time to be there to see those golden colours reveal.

Just 25km east of Tirana is Mt Dajti National Park. It is the most accessible mountain in the country, and many locals go there to escape the city rush and have a spit-roast lamb lunch. A sky-high, Austrian-made cable car, Dajti Express, takes 15 minutes to make the scenic trip (almost) to the top (1611m). The area surrounding the upper cable-car station is a bit anticlimactic. There are some ‘family-friendly’ activities such as shooting things with toy machine guns and hitting things with swords, or you can ride about a patch of rubbish-strewn wasteland on a pony. Enjoy a long walk through the park during the late November, for you will be stunned by the beauty of the foliage and colours of autumn.

A fresh place for the summer, an enchanted one during the autumn season and a blank white panorama for those winter days. Dardhe is located southeast of Korça (20 km). It is a mountain village located in a hollow between the hills of Saint Peter, autumn rock and several other hills. There are a few hotels, as well as a few guesthouses to be accommodated during any season.

The village is surrounded by high hills and fern forests. The climate is cool summer and cold winter with snowfall during most of this season. This village is known for its clean air and the healing power of respiratory diseases. Voskopoje can be called a pearl of the Albanian landscape. Besides enjoying the beautiful nature, you can learn more about the history of the village and its (once) 24 churches.

Driloni is located 5 km east of Pogradec, right next to the tourist village of Tushemishti. It is a karst spring that consists of three water lines that flow to pour a few tens of meters further, on the south-eastern shore of the lake. One of them, the main one, creates a large water basin, where you can walk, row a boat, enjoy the beauty of the rich flora and fauna. Aspen, maple, poplar, weeping willows or reeds make the air fresher and cleaner. While the swans and other birds that live here, as well as the fresh fish, offer a wonderful landscape. The autumn is a great time to be there as the foliage covers the park and the river.

Gashi River is known as one of the most beautiful and virgin areas of Albania. It is part of the Tropoja municipality. It lies in the eastern part of the Albanian Alps bordering Montenegro and Kosovo. The valley represents a north-south longitudinal stretch of about 27 km, until its confluence with the Valbona Valley below the village of Shoshan. Autumn colours are another reason to visit the area around it.

Gjinar village is part of the Administrative Unit of Gjinari, Elbasan Municipality. It is located 22 km south-east of Elbasan, 63 km from Tirana.The special feature of Gjinari is that it stands out for its climate and natural resources, offering permanent tourism, both in summer and in winter. You can do any activity you want: you can have a picnic, you can do hiking, camping, study expeditions, practice the sport of rally, etc. In addition to pleasure, Gjinari has an extremely great value as a curative area, especially for those who suffer from lungs. The air is clean and full of oxygen.

Lura National Park (Parku Kombëtar i Lurës in Albanian) is situated on the eastern slopes of Lura Mountain. It was established in the year 1966 by a decision of the Council of Ministers of Albania. The national park covers an area of around 1280h. The town of Peshkopi is about 25 kilometres east of the National Park while villages such as Fushë-Lurë and Sina e Epërme are even closer to the National Park.