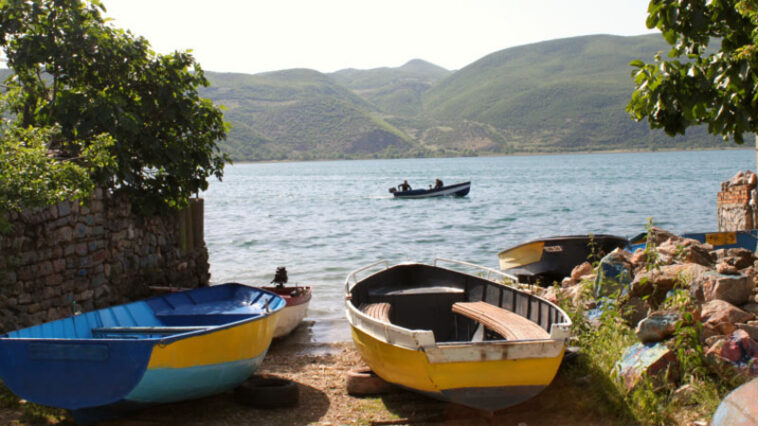 Escaping the summer heat is already a need as June 2022 has brought the highest temperature numbers and we are melting! If you feel hopeless and haven’t found the right place to go and freshen up, we have the right name for you: Lin, Pogradec!

Your summer days in Lin will be very pleasant, because in addition to the climate and fresh air that is filtered by the freshness of the lake, there is also the pleasure to enjoy a lunch with traditional cuisine and especially with the fish of the lake.

Learn more about the village and let us know if you are planning to visit it.

The origin of the name

The village of Lin is a small peninsula, located on the western shores of Lake Ohrid, 20 km from the town of Pogradec. As for the origin of the name there are many stories. One of them says that when the soldiers of Julius Caesar who arrived on this hill were so amazed that they shouted “Lyhnidas”, which means “Lake of Light”. While the residents themselves say that once the village stretched to the middle of the Lake and then the new village was created. Everyone said, “The village was born,” and since then it has been called Lin, as an abbreviation of the word “Born.”

Early inhabitants say that the village many years ago, stretched to the middle of the lake, but later gathered here where it is today. There are legends that say that once the peninsula of Lin was an island surrounded by water. lake-type settlement built on the surface of the lake, such as that of Maliq in Korca.

We visited Lin during the week and still there were many tourists entering the village. Some of them were there to have lunch in one of the restaurants by the lake, some others just for a short visit and otheres were looking for available rooms at the guesthouses. As the village is very small and every local knows what happens next door, they will help you find the best place to stay even if you haven’t booked yet.

Lini is a tourist village by the magnificent Lake Ohrid, and is beautiful not only from what nature has given it, but it is also a town known for its early cultural and artistic traditions. In terms of music and traditional clothing, they are similar to those of the city of Pogradec. This village as well as the whole area of Pogradec is known for the tradition of handicrafts. Women continue to preserve the tradition of carpet weaving, embroidery, or crochet, which she finds exposed nowadays at fairs organized in the city, but also in national ones.

Every room is with a lake view

As the village is surrounded by the lake, you can’t help but wake up at a balcony with a nice lake view. Most of the houses have two floors and guest are usually welcomed in the second floor to enjoy the best view. As you walk through the main street through the village, you will notice that all the houses on the left are built by the water and in almost every alley there is a boat waiting for a rider.

Life on this peninsula, according to historical records, is thought to have started in the first period of the Iron Age (time to which belong the famous Lin mosaics, which are located on the hill) and continued until the Middle Ages. Early. The Paleo-Christian basilica of Lin is located in the western part of Cape Lin and represents one of the most important monuments of Albania. The structure is decorated with multicolored mosaics with floral, geometric motifs and Eucharistic scenes, typical of the Paleo-Christian period.

Archaeological finds from the hill above the present-day village include the foundation walls and mosaics of an early Byzantine church dating back to the 6th century. It is said that in ancient times, this was the favorite holiday destination of the Roman Emperor Justinian’s parents.

What to do in Lin?