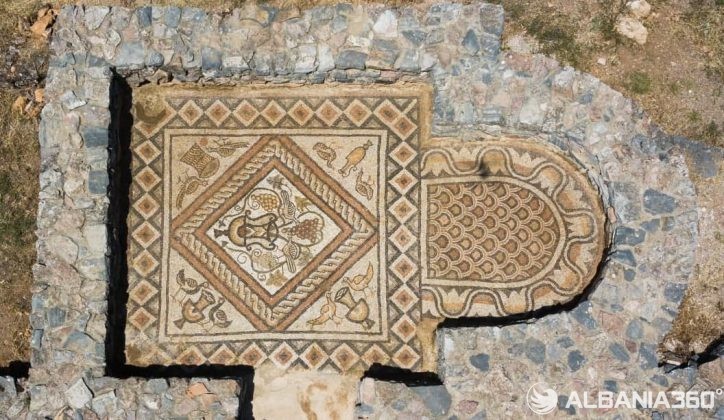 Leaving the city of Pogradec to go towards Tirana, your next stop should be in the village of Lin, for the good food, for a boat tour, for the breeze coming from Lake Ohrid but also to discover a piece of history.

It is the mosaic, parts of which belong to the 4th-5th centuries, of the period of the rule of the Roman emperor Justinian. The church has been decorated with polychrome mosaics featuring geometric, floral and Eucharistic motifs, typical of the Paleo-Christian era. The part of Pastophorus, a multifunctional environment, which served for the preservation of evangelical texts and sacred items of liturgical use, discovered in the Basilica of Linus will remain open.

The mosaics of the Paleo-Christian basilica of Linn consist of motifs that include, not only elements used in other basilicas such as: birds, braided motifs, scenes from the aquatic, plant and animal world, and flowers but also motifs that are very rarely found such as egg bees. For the construction of the mosaics were used small stones in the form of cubes with a composition of limestone, marble, those of brick or cubes of glass dough. Also the content of the inscription with extracts of the Psalm of David, supports the theory that we are probably dealing with a pilgrimage center.

Because of the religious connection, this structure was tried to be kept secret by the communist regime that ruled Albania from 1945-1990.