Gjirokastra region is full of old villages and more history to tell. One of them is the village of Labova e Sipërme in the Municipality of Libohova.

Labova e Sipërmeis located 146 km south of Tirana, the country’s capital, and 15 km from Gjirokastra. This village is remarkable for the history and the great cultural values that it holds over the centuries.

The monument “Church of Labova e Kryqit” is one of the most interesting monuments in Albania dedicated to St. Mary. You go there following the highway that leads to Sofratike and return to Libohova. At the turn towards Libohova take the road that goes to Suha and continue on this road until a right turn towards the heights of the hills.

A few kilometers further is the Labova of the Cross, the whole journey takes about 40 minutes. The Church of the Labova of the Cross is one of the oldest in Albania and once contained a sacred relic believed to be part of the true cross of Christ. The building is typically Byzantine with a high central dome with nave and aisles built in order to create the figure of the cross.

There are at least 9 distinct levels of frescoes painted on the surface of the interior walls. The church, as seen today is mainly 13th century construction and the time of the Despotate of Epirus, although the initial foundations can go deep into the time of Emperor Justinian in the years 527-565 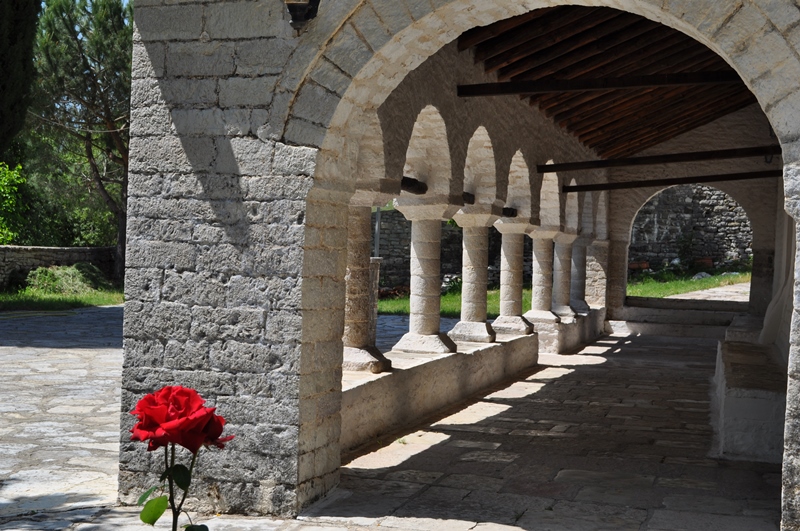 It is not a church like all the others, it is ancient with many puzzles and is thought to have been built on a Pelasgian site. Researchers from all over the world tire a lot to unravel our church of St. Mary, it is magic, a living legend but difficult to unravel. In the iconostasis carved in wood and painted with gold is the whole story from the “Old Testament” of the Bible. From the outside, the building presents an architecture of the most typical Byzantine style, with a high central dome with oil arranged and reinforced with counterfort. A later built narthex is located at the main entrance. Saint Mary’s Church is a living relic that has withstood all the centuries.

The history of the church building

The church of St. Julita in the Monastery of Dhuvjani