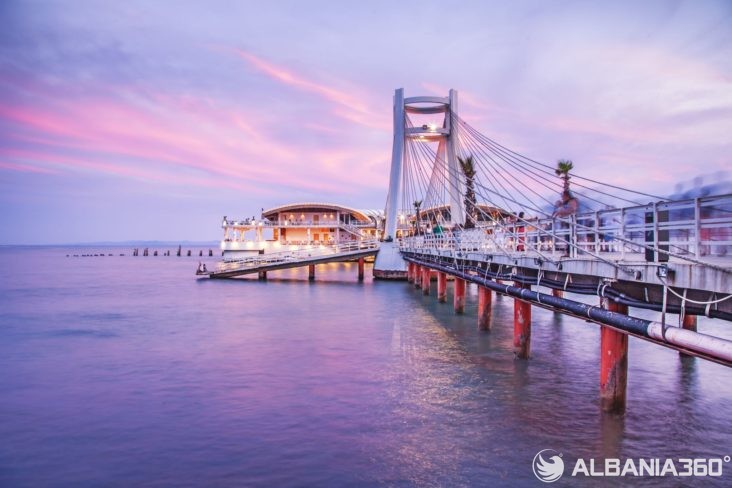 Looking for a walk by the sea, for good food from the water treasures, for a cultural visit, or an escape in the green, Durres has it all. Here are the destinations we suggest you to visit:

After restoration and opening to the public in 2015, only on the first floor of the building have been re-exhibited about 2100 objects belonging to the period before the founding of the city until the 4th century AD. It is the largest archeological museum in Albania and you will find there archeological objects of prehistory, archaic period, and antiquity. In addition to the amphorae and anchors discovered at the bottom of the sea, the museum also has a rich fund, which in the future will be part of the medieval pavilion.

2. Visit The Amphitheater of Durres

Around 50 years ago would begin the discovery of the most important monument of antiquity in our country, and that has a medium size, among 30 amphitheaters discovered from Rome to Lyon and Budapest. The amphitheatre was built in the beginning of the 2nd century AD. It was used for performances until the 4th century AD. The earthquake of 345/346 likely damaged the monument and closed the ‘ludii gladiatorii’. An early Christian chapel was constructed on the amphitheatre in the second half of the 4th century. The chapel was initially decorated with frescoes; in the 6th century, mosaics were added. A medieval chapel was built in the 13th century, also decorated with frescoes. The amphitheatre was covered over in the 16th century, after the Ottoman occupation, when the wall was built nearby. Marin Barleti described the monument as ‘well constructed’. You can find it easily in the center of Durres.

The Byzantine Forum (market square) was the Byzantine Roman center of the old city, which was called Dyrrah. It occupied a central position in relation to the great public and religious constructions of the Byzantine period. It was built during the time of the Roman Emperor Anastasios at the end of the 6th century (481-518). In the center of the Byzantine forum there is a podium and well, on a floor of marble tiles covering the floor, up near the colonnade with a perimeter of 130ft (40 m). Decorated with columns and large marble slabs, its architectural appearance testifies to the function of a square that performed primarily the function of a market. The construction of the facility stood out as one of the strongest in the entire Balkan area.

The circular tower (Torra), was built in the 15th century on the Byzantine tower. This is evidenced by the presence of blocks from the previous fence, architectural fragments, and ancient reliefs. The tower has a diameter of 52 ft (16m) and a height of 30 ft (9m). The tower is entered through a brick-shaped gate. The tower is equipped with 5 turrets and 3 partitions (alcoves). The upper perimeter is closed with high walls. The interior is built of domed brick. Climbing to the height is done from the inside, with narrow and sloping stairs.

The Albanian monarchy, which lasted from 1928-1939, has been defunct for more than seven decades, but this building atop a hill in Durres stands as an interesting reminder of this era. These days the Royal Villa is derelict, but it has a fascinating history. It was built in 1937 for King Zog I, who only got to enjoy the residence for a year. After the monarchy was dissolved the villa became a grand communist reception building, welcoming both Nikita Khrushchev and Jimmy Carter on official visits. When Albania descended into temporary civil unrest in 1997 the villa was ransacked, and has remained unaltered since then.

6. Drive to Arapaj for the ancient mosaic

The mosaic of Arapaj in Durres belongs to the 6th century AD. The discovery of the St. Michael’s Basilica of the same century with all the mosaics that were discovered in 1974, was made based on old documents and field observation. The basilica consists of an apse, altar, salons, atrium (courtyard), 2 funerary annexes in the north and south, etc.

The long coastline of Durres along the Adriatic Sea offers many opportunities to enjoy the beach during the summer. Some of the best beaches you can go to are: Cliff of Kavaja, Currila Beach–Kallm Beach, Cape of Rodon, Lalzi Bay Beach, General’s Beach and so many others.

8. Have a walk on Vollga

Every Albanian city has a boardwalk, but Durres has it by sea. It is called Volga, the most famous and popular area of the city, where weekends are the number 1 destination for the whole family. Lots of bars, restaurants, fresh ice cream stands, games for children and adults, the crash of the waves with the boardwalk and the wooden bridge that leads to a bar with fantastic views.

Whether in Vollga restaurants or somewhere outside the city, you will smell the fried seafood in linguini, fresh mussels, and shrimps with juicy lemon and olive oil. Fresh food, plentiful meals to satisfy the senses and make you return again to the same destination.

It is said that Durres has the most beautiful sunsets in Albania. You have to go there yourself to prove this theory. Surely the color palette on the horizon is magical for anyone who sees it. Enjoy a magical moment with your best half and everything will look more beautiful.