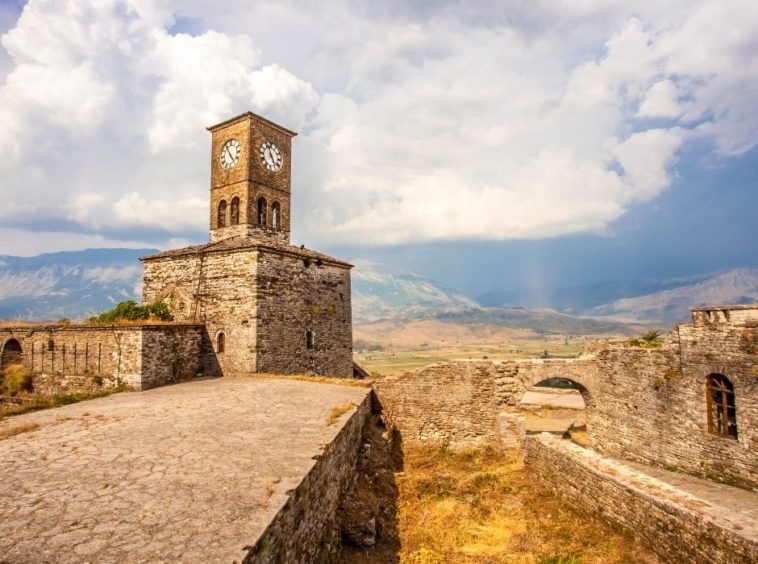 Do you know which is one of the typical symbols of Albania?
It’s the medieval castles and not only. Albania for centuries has been in a geographical position coveted by many countries. Its access to the Adriatic and Ionian Seas made it a desirable territory by the great powers, so this small Balkan country has been on the battlefield for centuries and centuries. But Albanians have never, until today, been a people who surrendered. They had brave and clever princes and kings, and knew how to use the terrain in their favor. Albanians have built castles since the 3rd-2nd centuries BC, have continued in the time before the Ottoman conquest and during it.
They built them on the tops of the mountains, where they controlled the whole terrain through watchtowers, by the sea and by the rivers and near the fertile lands for food and water.
These castles, although many times burned and destroyed, have managed to survive to this day.

Here are the 10 most beautiful castles you should visit in Albania:

Rozafa Castle in Shkodra is one of the most important castles in Albania and the main tourist facility in the city of Shkodra. It rises on a rocky hill west of the city, surrounded by the waters of the rivers Buna, Drin, and Kir. From the coins found in the castle, we learn that the city at this time was called Scodrinon. In 181 BC the city becomes the capital of the Illyrian Kingdom with King Genti at the top. In this period the city was located in the southern part of the hill, surrounded by walls and entrance gates while on the hill where the castle stands today was built the Illyrian Acropolis.

Built in 1190, in Kruja, this city had later become the capital of the first autonomous Albanian state in the Middle Ages. Kruja Castle is the oldest castle in the entire Albanian territory. This elliptical castle with a perimeter of about 2650 ft (804 meters), occupies an area of more than 6 acres (2.5 hectares) of land and is built on a rocky hill. It is also ranked as one of the best castles in the whole world.

It is located in the suburbs of Tirana. Petrela Castle has gone through several periods of construction and demolition. It is thought to have been built in the late antique period, (3rd-4th century AD) and was rebuilt during the reign of the Byzantine Emperor Justinian I (527 -565). In the 15th century, Petrela was the first Castle after Kruja, which was besieged and liberated by Skanderbeg. Petrela Castle was one of the centers that withstood the Ottoman occupation, until the last years of the life of Skanderbeg.

Bashtova Castle rises near the village of Vile-Bashtova at a distance of 2-3 miles (3-4 km), north of the mouth of the Shkumbin river. The castle was built in the 15th century and served to the Venetians as a trade exchange post. Its western part was rebuilt in the 18th century. Its walls have a height of about 30 ft (9 meters). Bashtova Castle, it is advisable to visit in warm seasons or in dry weather, as in winter or autumn sometimes floods the area where it is located and it may become impossible to explore.
READ MORE ABOUT BASHTOVA HERE

The city of Epidamn Dyrak was built by the Illyrians Taulant in the XIII-XI centuries BC. The first inhabitants of Dyrrah, before the Illyrians called protoiler, Pelasgians, erected in the suburbs of this city, the first prehistoric settlements. The first center or harbor named Dyrrah was located on the coast of Durrës Bay. According to ancient authors, this city was founded by two kings of Illyrian origin named Dyrrah and Epidamn.

The castle of Elbasan, together with its surrounding walls, clearly show the military importance of the city of Elbasan during the Ottoman period. Documents prove that this castle, at the time of its flourishing had 26 towers, of which today are preserved only 8. 6 towers are on its southern wall and 2 towers are on the western wall. This castle dates back more than 2,000 years ago and belongs to the Roman period, the construction of which began in the 3rd century BC. Its function has been a military fortress, where it is thought to have housed a legion which served to secure control of Egnatia Road, which at this time was also the most important artery of the Roman Empire.

The Castle of Berat

Berat Castle is one of the largest historical monuments in the Balkans, a large fortress that rules over the Osum River. The top of the hill is surrounded by an outer peripheral wall with 24 towers. Inside this castle, there are about 14 churches which have made this castle quite popular. Inside there are quite interesting frescoes. Behind the church of St. Todri are the churches of St. Kolli, St. Constantine, St. Helena, St. Mary Vllaherna, etc.

The castle of Porto Palermo is located in the bay of the same name on the shores of the Ionian Sea, in southern Albania. The castle differs from the triangular planimetric shape with three strong bastions around the corners. It is one of the many mansions of the strategist Ali Pasha Tepelena, which he did not without purpose build at strategic points. It was built by Ali Pasha as a gift to one of his wives, Vasiliqina, whom, according to chroniclers of the time, the Pasha of Ioannina was very fond of. The beauty and grandeur of this castle have taken place in many books dedicated to Ali Pasha.

Gjirokastra Castle is one of the largest in the Balkans, and looks like a large stone ship. Archaeological discoveries in the area of the castle show that this place has been lived in since the 4-5th century. The castle was originally built as a typical feudal property of the time, by wealthy families, who wanted to be safe and protected from the different wars. It later became an inhabited center for many other families.

Lekures Castle is located among the ruins of the Village of Lekures, abandoned in 1878, on the top of a high hill that rises in the shape of a pyramid. From the position of placing the towers, it is clear that the direction of control of the Castle was from the sea. The Castle of Lekures held a garrison with about 200 soldiers and its construction belongs to the 16th century, the possibility of its construction is the year 1537, when Sultan Sulejmani attacked Corfu and it was necessary to control the pier of Saranda and the Saranda-Butrint road, as the latter was attacked by the Venetians. Today, the Castle is preserved in good condition, restored in 1994 -1995 by the current tenant owners.

Dear adventurer, let us know in the comments below if you visited any of the castles mentioned above. We would love to hear about your experience!