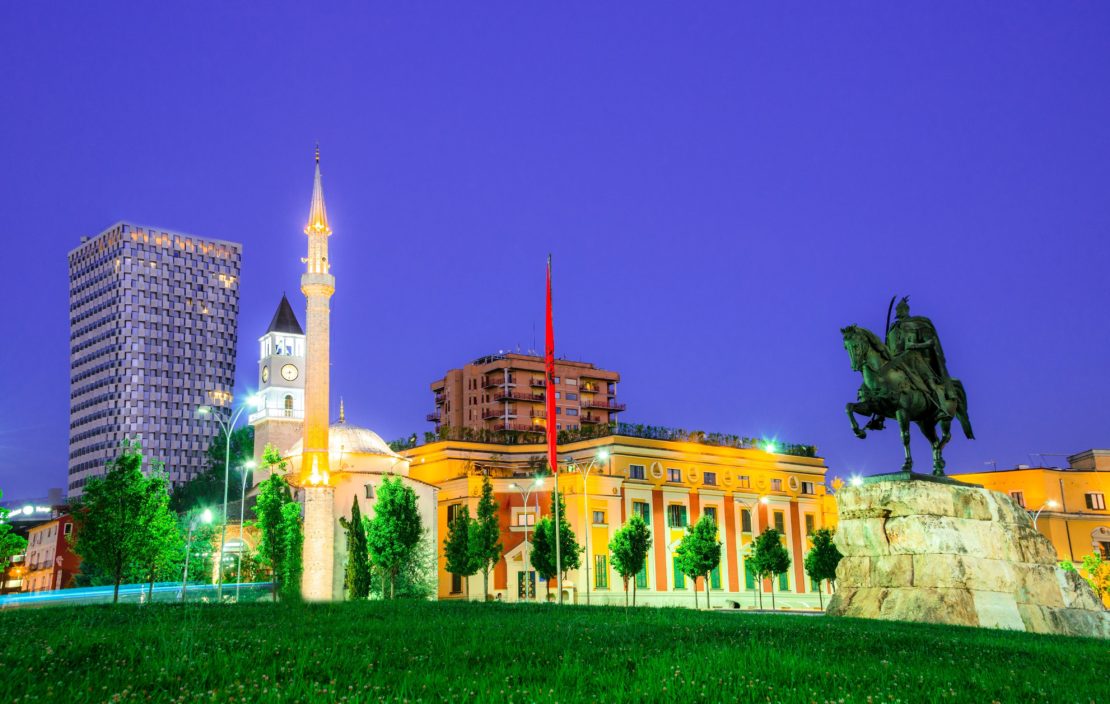 Often considered the heart of Albania, Tirana is undoubtedly the hearth that brings together Albanians from all regions and cities. It is the city that hardly sleeps. The day is dynamic amongst traffic, noisy roads by a river that runs through the city, numerous shops on Kavaja Street, Durres Street, Dibra Street, etc., countless cafes and beauty salons, where you notice the young age of the people and their energy in every corner of the city. The night belongs to the parties and fun, as young people enjoy live music with the best singers in the country in rock, pop or even folk genres.

So much history, culture, arts, sports and so much to explore that it would take months to really get to know this mix of cultures.

The capital with over 906,000 inhabitants today carries about 31% of the country’s population and it is expected that from year to year this number will continue to grow.

And while welcoming tourists year after year, here is what you should not miss on your visit to Tirana:

This square was renamed “Skanderbeg” Square on November 26, 1937. It was projected in a circular shape and with a circular fountain in the middle, while the building that dominated was the old Municipality which was demolished in 1980. This square was surrounded by: Old Bazaar, Clock Tower, Et’hem Bey Mosque, Evangelical Church. During the years of socialism in this square was placed the statue of Stalin (November 4, 1951) which lasted until 1968 when it was replaced with the monument of Gjergj Kastrioti Skanderbeg. The monument was built there on the occasion of the 500th anniversary of the death of our national hero. Now, Skanderbeg Square is a space dedicated only to pedestrians. Paved with a carpet of stones from all Albanian lands and from all the provinces of Albania, on which on sunny days flows the rainwater collected inside it.

2. The Pyramid of Tirana

After the death of the dictator Enver Hoxha, a series of ceremonies were performed, and at the major levels of the Labor Party, the Bureau, and the Central Committee it was discussed how the figure of the communist leader would be immortalized. A program was drafted, according to which Hoxha’s busts were then placed in the main cities of the country. One of the points of this program was the construction of a museum for Enver Hoxha, which had to be projected and built within a record time of two years (’86 -’88) to be inaugurated on the occasion of the 80th anniversary of his birth. That was the Pyramid. With the fall of communism, the Pyramid turned into an International Cultural Center where many activities took place, from spectacles to fairs. In the early 2000s, Top-Channel TV station was installed in that building, and a few of its studios are still there.

The Clock Tower of Tirana began to be built by Haxhi Et’hem Bey in 1822 and ended with the contribution of wealthy families of Tirana. Since the tower has accompanied the development of the city this was reflected in its appearance where the first half is of the Ottoman style, the whole part is carved with stones, while from the balcony above it is of the western style. The Clock Tower is a symbol of the emblem of the Municipality of Tirana and together with the Et’hem Bey Mosque forms a unique architectural ensemble.

4. The Castle of Tirana

This castle is located in the historic center of the city of Tirana, in one of its most frequented areas. It represents a field fortification with a rectangular plan 525 ft by 394 ft (160 x 120m) with the longest part east-west. During the excavations carried out in 2001 and 2008, it is thought that the castle belongs to one of the fortifications built or rebuilt by Emperor Justinian in New Epirus ( province of Durres) in the 4-6th century of our era. Within the walls of the castle of Tirana, a new pedestrian area has recently been created, transformed into a recreational space for the capital. This space serves as an environment where artisans and local traditions, cuisine, and art of Tirana are promoted.

The Large Artificial Lake Park is the largest green massif in the city of Tirana. From a functional point of view, it solves to some extent the needs of the population for rest and recreation, free movement, and jogging for all ages. This public park in the south of Tirana includes the artificial lake and some attractive points such as the Church of St. Procopius, the memorials of some famous Albanian personalities, etc. Inside are the tombs of British and German soldiers who fell during World War II and the Mausoleum of the Albanian Royal Family built in 2012. The park and artificial lake remain one of the most frequented areas of the capital. The Grand Park is also called the lungs of the city because of the numerous plants, over 120 species of trees, shrubs, and flowers.

The New Bazaar is a space that operates 24 hours a day, where in the morning the biggest focus is on product marketing and in the afternoon on culinary issues, restaurants around, and the development of artistic-cultural activities such as parties, fairs, etc. This shopping center is located in that area of Tirana, which together with the neighborhood of Mujo represents one of the oldest areas of the city.

This square located at the end of the Boulevard “Deshmoret e Kombit”, in the southern part of Tirana, was designed by Italian architect Gherardo Bosio in 1939-41. Bosio designed the Imperial Boulevard (today Boulevard “Deshmoret e Kombit” which ended in the square “Piazza Littorio” today “Mother Teresa” square. The University building as the last element of the boulevard is characterized by heavy structural monumentality but also by clear and clear lines.The square is named “Mother Teresa” in honor of the Albanian Catholic nun.

Former residence of senior members of the Communist Party leadership. This used to be a no-go area for ordinary citizens. Today this neighborhood is no longer that of villas hidden in the green, but a special mix of high-rise buildings, villas turned into international residences, luxury boutiques, cafes, and clubs crowded in a small area. The block is especially frequented by young people due to the diverse complexes of services and luxury premises. Of course, anyone looking for more liveliness at night, the light of nightclubs, should turn to the Block. The villa where the former communist dictator Enver Hoxha lived is a construction of the communist period with an architecture which in some parts mimics to some extent the architecture of the 30s. The rest is a heavy concrete structure lined with white stone slabs. This house, located in the area of the former Block, has been an inviolable, taboo, and mysterious object during the communist dictatorship.

The museum video exhibition set up inside the atomic bunker of dictator Enver Hoxha on the outskirts of Tirana and continued with the opening on November 19, 2016, of BUNK’ART 2 in the center of the capital. While BUNK’ART 1 is dedicated to the history of the Albanian communist army and the daily life of Albanians during the years of the regime, BUNK’ART 2 reconstructs the history of the Ministry of Interior in Albania from 1912 to 1991 and reveals Security secrets, political police which was the harsh weapon of persecution used by Enver Hoxha’s regime.

One of the most famous works of the public art installation “Reja” (The Cloud), conceived by the well-known Japanese artist, Sou Fujimoto, has been installed in front of the Art Gallery in Tirana. “Reja” functions as an independent space, with a colorful calendar of activities, to make an action in the largest partnership of local culture, individuals, educational institutions, communities, etc. The pavilion is intended as a free social and flowing space Fujimoto is described as a transparent terrain, a delicate, three-dimensional structure, and each unit is composed of steel rods.

There are countless attractions in Tirana for every age and every taste. We are passionate about history, architecture, art, culture, or even entertainment in many forms, Tirana is the Albanian destination that has absolutely everything.