The city that never sleeps during the summer!
The one who has given its beautiful name to many Albanian girls -Saranda!

Situated on the blue shores of the Ionian Sea, it is a summer oasis of beaches, vacations, relax, entertainment for all ages, and star gazing holidays.

Do you want to learn more?

These are 10 things to do in Saranda:

It is located among the ruins of the Village of Lekurës, abandoned in 1878, on the top of a high hill that rises in the shape of a pyramid. It held a garrison of about 200 soldiers and its construction dates back to the middle of the 16th century. The possibility of its construction is the year 1537, when Sultan Sulejmani attacked Corfu and it was necessary to control the pier of Saranda and the Saranda-Butrint road, as the latter was occupied by the Venetians. Nowdays, it is a tourist attraction. You will even find a bar inside the walls, a cozy environment and live folk music.

2. The Ancient City of Butrint

To the south of the city of Saranda, on a hill on the Ksamil Peninsula, across the island of Corfu, is the ancient city of Butrint (Buthrotos), founded there at the beginning of the 7th century BC. The city rises on a not very high hill, and which is surrounded on all three sides with water. To the east and northeast of the hill lies Butrint Lake, while to the south passes a canal that connects the lake with the Ionian Sea. This ancient city is now a national park, open to tourists and you can have a magical afternoon walk through its streets.

It is located east of Saranda. The church consists of a nave and a narthex, the latter being slightly longer than the width of the church. The icons and iconostasis of this church were important works appreciated by foreign scholars of the Byzantine period, which delay its construction before the Ottoman conquest.

Explore the most beautiful bays and beaches by boat. Gabby tours is organising daily trips around Saranda and it’s surely the easiest way to reach so many places within a day. The departure location is at Rruga Jonianet, in front of Hotel Kaonia, easily accessible and the tours prices is 40 euro per person, including the lunch buffet. The staff is very kind and professional and will make you feel welcomed.

It is located south of the Village of Mesopotam, on a small hill between the two beds of the river Bistrica. It was built in the time of the Byzantine emperor Kostandin Monomako (1042-1054). This church is unique, it is the largest of the Byzantine churches preserved in Albania in the 11-14th century and among the oldest architectural monuments. The church is distinguished for its unique architecture, for its brick decoration for the sculptural reliefs on the exterior walls of the facades, for the capitals, for the artistic values, for the level of Byzantine style construction without excluding any Roman influence.

Take your friends to the next level of exploring the sea and book them a special tour with the red semi-submarine in Sarande. You will have the chance to actually see the shipwreck at the bottom of the sea, lying 22 m deep. You can also see the reefs 15 to 30 meters deep. The best thing about it is that you can always go back at the top of the semi-submarine to breath some fresh air whenever you need it.

Shpella e Pellumbave is a small beach squeezed in between the rocks of the Ionian coast, near Ksamil in the south of Albania. The beach is located right next to Mirror Beach, but you’d have to swim around the rocks to get from one beach to the other. To get there you have to follow Rruga Butrinti between Saranda and Ksamil and take the exit at the sign of Mirror Beach (Plazhi i Pasqyrave). From there you just follow the road until you see the sign of Shpella e Pellumbave where you take a left. You will end up at a challenging unpaved road, so be careful when driving. When you reach reach the end of the road, you need to climb down a few flights of stairs to reach the beach.

Shpella e Pellumbave, Ksamil – things you should know before you go

A picturesque area located about 30-40 minutes from Saranda by car. A natural source of water in an almost magical blue / green color that is absolutely clear. The spring is thought to be 150 ft (45 meters) deep, but some say it is deeper than that. There is an old legend about this unique place that locals still tell tourists. You have to get there, to learn more about it. 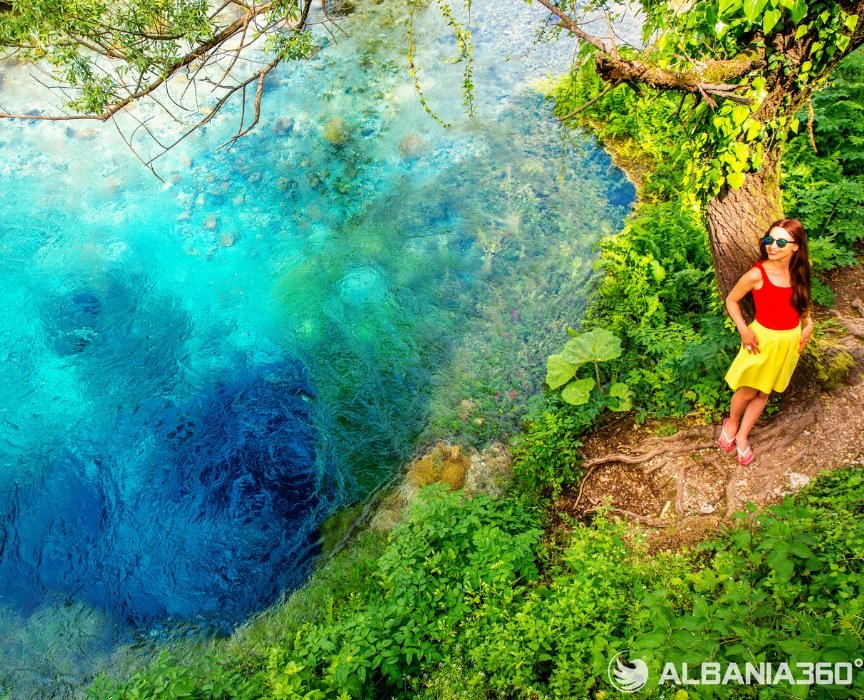 9. Visit the 3 islands of Ksamil

By bus from Saranda to Ksamil, (with a ticket of 100 ALL) can be the first stop. The four magnificent islands of Ksami display one of the most stunning beauties in all of Albania. The sand is white; the water is crystal clear, and the color blue accentuated.

Once you visit the beaches of Saranda, you will rarely want to replace them with others in the Mediterranean.

The Ionian Sea has given a precious gift to this city and the surrounding areas and has blessed it with blue rocky shores, greenery and fantastic landscapes to relax the eye and mind. The beaches that you should not miss in Saranda are:

The coastline of Lukova consists of a variety of small beaches and a large beach called Lukove Cave. It is located 25 km from Saranda. The road to this beach is quite long and follows the hills down like a snake path among the olive trees giving it a unique and natural beauty.

A remote beach that offers opportunities for diving and tranquility, but that has few tourists, as the only way to get here, is by foot or by car. Bathing shoes are recommended!

Borshi is known for its olive oil, probably the best in the country. It is also known for the beach and the castle on the hill. Borsh Castle is located about 2 miles 3 km northwest of Borsh Village, Saranda. Borsh Castle rises on a hill, which ends at the top with a rocky ridge and occupies a central position opposite the ancient city of Borsh, which once lay on the slopes of this hill.

The beach of Manastir

Manastir beach is located less than 5 miles (8 km) away from Saranda, on the Saranda -Butrint road. The beach of Manastir takes its name from the Monastery of St. George, which is located on the hill above this beach. Near the beach of Manastir is the Wall of the Bull, the protective wall of the ancient city of Butrint. The beach is small and with crystal clear water. On this beach, there is also a bar where refreshing drinks are served, while a camping tent has been built for vacationers who prefer free holidays and away from the noise of the city.

It is  located almost 12km away from Saranda along the road to Butrint, very close to Ksamil. This small, secluded, pristine and very picturesque beach is at the bottom of a hill near a small sea bay. The beach is the ideal place to enjoy the tranquility and the sea in complete relaxation. The beach is accessible by car and there is also a small restaurant serving seafood and fresh fish.

Dear adventurer, let us know in the comments below if you have visited any of the attractions above! We would like to hear about your experience!