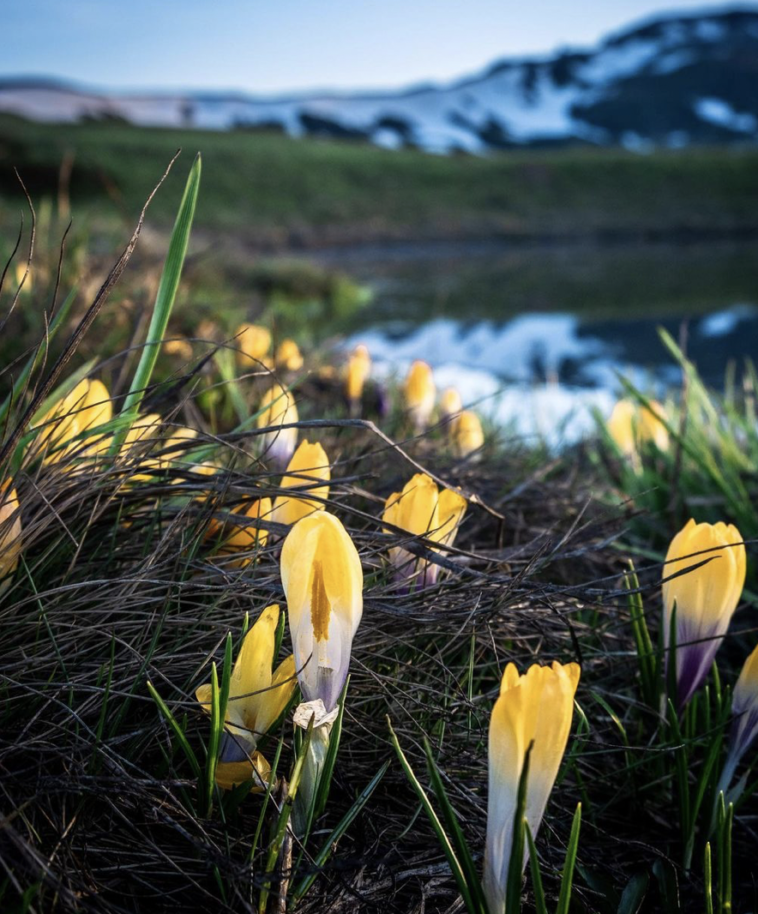 Trail of Colors/ Shtegu i Ngjyrave - Photo by Afrim Tahiraj

It was considered as ‘Shishtavec/Novosej – Kallabak- Çajë’ until Afrim Tahiraj decided to transform it into one of the most visited trails by baptising it with the new name “Trail of Colors”. It is a journey of colors indeed.

Some have considered it the destination of the year and many are asking for the best time to visit it. As the spring has already sprung and the flowers has bloomed, you are one decision away from visiting this unforgettable site, such as the Trail of Colors!

Hiking lovers, you will have to spend at least one night camping, to enjoy the perfect tour the agencies are offering through the trail, so get your backpack ready because magic is calling!

It is part of the Korab-Koritnik Nature Park and passes through the Çaje Mountains of Kukës and continues to Fushë e Korabit. Very close to it, there is the cross-border triangle Kosovo-Albania-Northern Macedonia.

How to get there

Trail of Colors is the passage made from Novoseja (Kukes) or Shishtaveci to the village of Grykë Çajë, part of the municipality of the same name. The Trail is part of the High Scardus Trail, a trail that crosses the border of three countries, Kosovo, Albania and Macedonia, with a length of 495km. Scardus is the Latin name for the path, which means “multicolored”. This is due to the fact that along the trail you pass the largest Alpine Pastures in southeastern Europe, in which during the spring period you can find a variety of flowers. The most special flower that you can encounter along this path is the Albanian Lily (Lilium albanicium), an endemic plant, which is classified as an endangered species

Along the trail you can climb the Kallabak Mountain 2174m above sea level, as the trail to the Tea Gorge passes just below its peak. You can  also see the Sharr Mountains that stretch from Kosovo to Macedonia, Gjallica, Koritnik, Korab, as well as the largest Alpine Pastures of Southeast Europe, part of which is the trail you are following to get to the village. Tea Mouth. From the slopes of these pastures, at the bottom of the valley, the river Reka e Çajës is created. You can choose to follow the path along the ridge that leads to the village of Grykë-Çajë, or go down to the valley and follow the flow of the Reka River to the village of Grykë-Çajë.

Trail of Colors leads to Stani i Hoxhës 1350m above sea level, along the road that leads to Novosejë. After 2 km of walking, along the trail there is also Lake Novoseja 1500m above sea level. Novoseja Lake is an artificial lake, 400 meters long and 200 meters wide, and is surrounded by its three forest wings, mainly pine forest. Then the trail continues for 5 km to near the top of Kallabak at 2174m. The trail, along all this part of the climb, passes through easily passable terrain, between the alpine pastures.

Natural mountain ecosystem “Korab – Koritnik Natural Park”, has an area of 55,520 ha, or 555, 5 square kilometers, part of the Alpine Region, included in the regions of Kukes and Dibra. The Koritnik – Gjallica – Korab mountain range is located in the northeastern part of the Albanian territory and extends from the borders with Kosovo, to Mount Deshat, in the southern part of the country, bordering Macedonia. It is part of the Central Mountain region, the so-called Eastern Albanian Alps. The massif in question has many mountain peaks interrupted from time to time by radial tectonics, ending in the form of gorges or valleys.

This site is recommended for everyone who feels like hiking for hours and enjoying the energy of nature. We would strongly suggest you to talk to your trusted agency before you reach Kukes and get a local guide to accompany along this adventure. Trail of colors is best enjoyed with a lot of friends so call everyone you know and plan your best spring weekend amongst the colors.