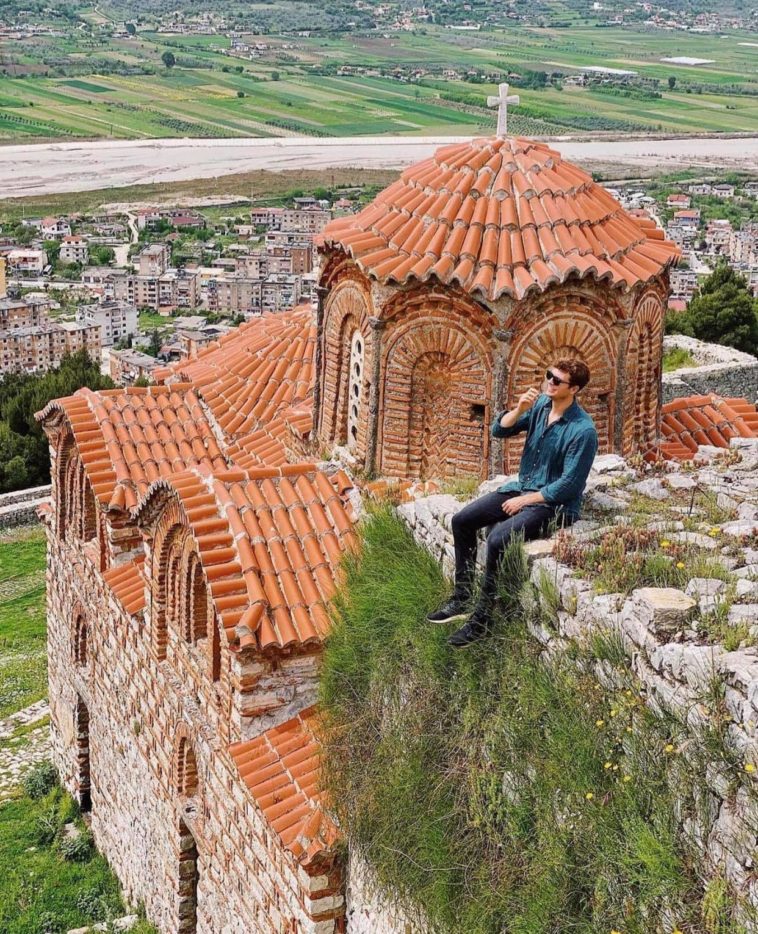 The best daily getaways from Tirana will take you to beautiful beaches, hiking adventures, outstanding landscapes, historic spots and more.

Summer 2021 might be at its end, but not your fun time. Plan your weekend ahead and call your friends to a daily exploration adventure. A change of scenery, a road trip or even a lunch ourdoors—is a great way to clear your head and feel revitalized. All of the highlighted destinations are not only excellent places to relax but offer an abundance of activities for both the adventurous and cultural set.

Ready to get traveling? Here’s Top 15 daily getaways from Tirana!

Dajti National Park is the closest mountain to the city, only about 15 miles (25 km) east of Tirana. A trip there is one of the most favorite tourist activities in Tirana. It takes 20 minutes by car or bus from the center of Tirana to the cable car station. Then you take the Cable Car (Dajti Express) to experience a wonderful adventure. An impressive and enjoyable trip worth the look it offers. For a 13 minute ride, you can climb to the top of the mountain from where you will be able to see a panoramic view of the city, villages, forests, bunkers, houses, and all the surroundings.

Very close to Tirana is Rodoni Cape, the place where every visitor finds the best intertwined history with nature and the sea. In the northeastern part of the Cape is one of the most important objects of cultural heritage, Skanderbeg Castle, which began to be built after the first siege of Kruja in 1451, and further is thought to have been completed around 1452. The beach? Amazing! A gem of nature, where blue and green merge into one in the depths of the Adriatic, a beauty still virgin, that is recently being explored by tourists. Visitors to this place can enjoy the crystal clear water in the tranquility that the panorama offers, away from the noises of massive beaches.

30 km north of Durrës, behind the tall trees and the song of the ginkgos hides the Beach of Lalzi Bay, one of the beaches with the highest standards of the entire Adriatic coast in Albania. The beach that stretches from St. Peter to the direction of Hamalle and Rrushkulli, offers a fantastic sea and golden sand, with a landscape where the belt of trees beautifully hides all other constructions. 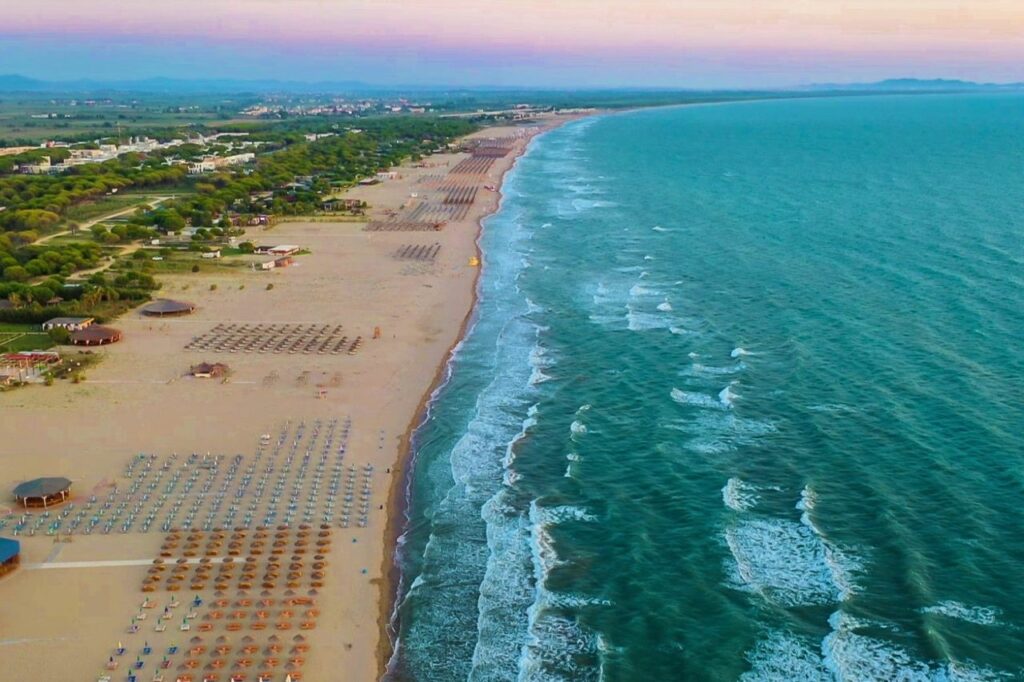 Petrela is located 12 km southeast of the capital, along the national road Tirana – Elbasan. The village lies on both sides of the picturesque Erzeni valley, half the distance of its length. Petrela is mentioned as early as the 11th century, in the battles between the Normans and the Byzantines, when it is written in the form Petrula, by Ana Komnena (1083 – 1153). Besides visiting the Castle, you should definitely try the Zipline, which is the first one in Albania and the largest in the Balkans. along with the adventure, you will be welcomed by the friendly staff and the Superman himself. Check it out HERE! 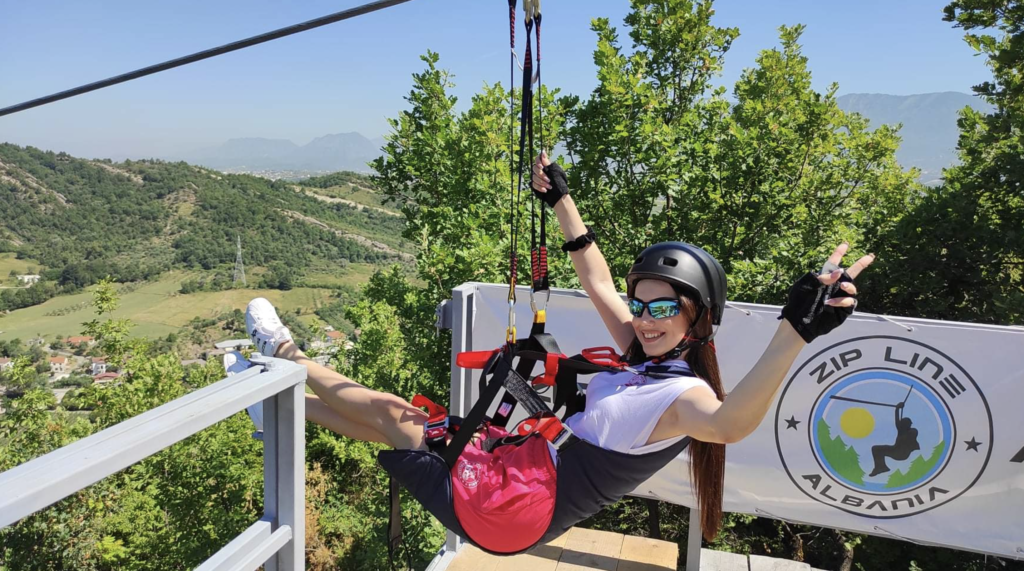 Preza village is one of the oldest villages in Tirana and very easily accessible. It lies in the North and North-West of Tirana and the historical center of this province is only 22 kilometers away from the center of the capital. For history buffs, it is a must visit. Its existence dates back to about 2000 years ago with the construction of the castle. Many scholars think that the castle of Preza was built for the first time during the third century AD. From this time until the end of the 19th century it was almost completely demolished and rebuilt several times. It is thought that the castle was built earlier.

The Eye of Cyclops or Cyclops Trail is located about 4 km below Krraba, in the village called Skuterrë, in the valley of the river Erzen. It is about 20 m wide and 120 m deep like a hidden gem in the gorge of Krraba. A small abyss sits at the bottom of the Krraba rocks, and below it is a lake of emerald water, which is said to be the place where the beast breathed and behind it remained a heart-shaped lake. In short, this legend speaks of a huge beast (almost all Albanian legends have a giant or a cyclops), which persecuted by the inhabitants of the area, after much damage it had caused, ended up just below these rocks.

The bazaar is the heart of Kruja, a lively place, full of beautiful souvenirs where it is impossible not to stop when visiting the city. A continuous series of brick roofs, wooden and stone shops, carpets with typical geometric patterns of the Balkans, cobbled streets and picturesque views: a miracle. In addition to the classic fridge magnets, you can make interesting craft purchases, such as household items, jewelry, tablecloths and carpets, many of which are handmade (in some stores you can also see the processing of fabrics in real time) .

Qafe-Shtama National Park is located about 15 miles (25 km) northeast of the city of Kruja. Amidst a pristine and rugged nature, it is the right destination for hiking, cycling through rugged terrain and camping. Climbing to an altitude of up to 5660 ft (1725 m), acquaintance with the diverse fauna, a natural panorama of the Adriatic Sea, Bovilla Lake, Kruja-Dajt ridge, are among the main attractions of this park.

About one hour away from Tirana you will find, in the district of Lezha, the village of Fishta.
The values of this village are related to the old Albanian tradition that is inherited to this day, in culture and art, in clothing, in cooking and in family and religious customs and rituals. You will find there the museum of Father Gjergj Fishta, a Franciscan friar, teacher, writer, translator and also chairman of the commission for the drafting of the alphabet in the Congress of Manastir, member of the Përmeti government delegation to the Versailles Conference and deputy chairman of the Albanian legislature in 1921. The building is his childhood home.

It is the largest lagoon in Albania, certainly the most beautiful in the Adriatic Sea. It is separated from the sea by the pine forest of Divjaka. It consists of an inner lagoon and an outer, smaller one. Things you can do: birdwatching, riding a bicycle, take a boat, have lunch, visit the tower for a better view. Divjaka is one of the closest destinations to spend a weekend in quiet nature and in the fresh air. This is due to the opportunities offered by the park, which has a considerable geographical extent. 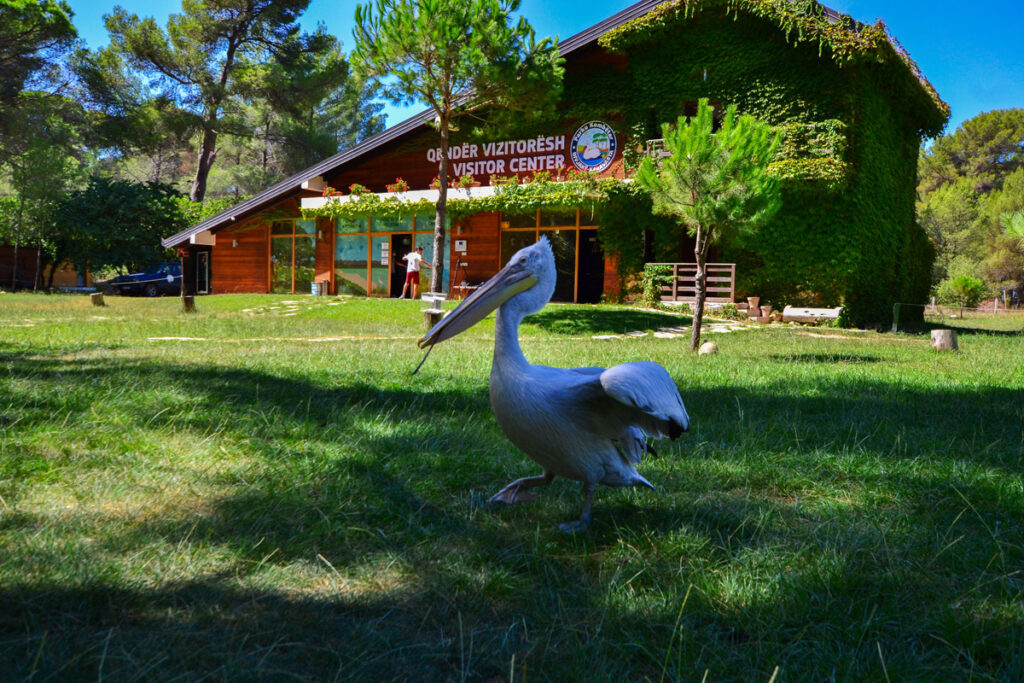 Patoku Wetland Complex represents one of the most interesting natural beauties of this coast. Located between the Mat River in the North and the Ishem River in the South. Over 358 species of tall plants and up to 179 species of birds populate the whole area, turning it into a real paradise for biodiversity enthusiasts. The flora and fauna of Patoku Lagoon attract thousands of visitors each year, who through boating in the quiet Lagoon, have the opportunity to see up close a real natural wealth.

The most precious gift that nature has given to this area are the 84 karst lakes and the excellent geographical position. They have a surprising flora especially in spring. Some are numbered with names for their beauty, such as Seferani, Merhoja, Cestija, Dega, with a rich flora such as white lily, yellow lily, characteristic of the waters of these lakes that attract the visitor’s attention. What to do there: ride a bicycle, take a boat ride on the lake, hiking, have lunch or picnic, sleep under the stars in the funky cabins.

It is a fortress from which the whole city can be seen. There are 14 churches inside for which this castle is famous for. One of them is the Church of the Holy Trinity, which dates to the late 13th and early 14th centuries. Very interesting frescoes are found in this church. Behind the church of St. Todri are the churches of St. Kolli, St. Constantine, St. Helena, St. Mary Vllaherna, etc. There are guesthouses within the castle area so you can be accommodated there to taste the true old-fashioned lifestyle.

Rozafa castle has a very unique story, which we explain better in this article: The Legend of Rozafa. We didn’t want to walk til up there so we drove until the entrance because there is a parking place for a few cars. The main entrance fee costs 400 Albanian Leke per person. Keep in mind that there is a museum inside the territory of the castle, whose entrance is an additional 200 Leke per adult, and there is a bar where you can rest a bit after walking around the castle. We had a walk around, reading the descripitions on the tables and rested a bit to enjoy the view of the lake of Shkoder, Bahcallek bridge and Shiroka from up . Then, we also visited the bar showed in the picture.

Apollonia was an ancient Greek colony city and former bishopric in Illyria, located on the right bank of the Aous river (modern-day Vjosa). Its ruins are situated in the Fier region, near the village of Pojani (Polina), in modern-day Albania. The fascinating landscape of the archeological park, which has been preserved in an exceptionally intact condition, comprises a successful combination between the beauty of monuments and nature, attractive through its long history, in an atmosphere of relaxation and meditation. Its foundation took place immediately after the foundation of Epidamnus – Dyrrachium and quickly became one of the most eminent cities of the Adriatic basin, which was mentioned more frequently from the other 30 (thirty) cities bearing the same name during Antiquity.