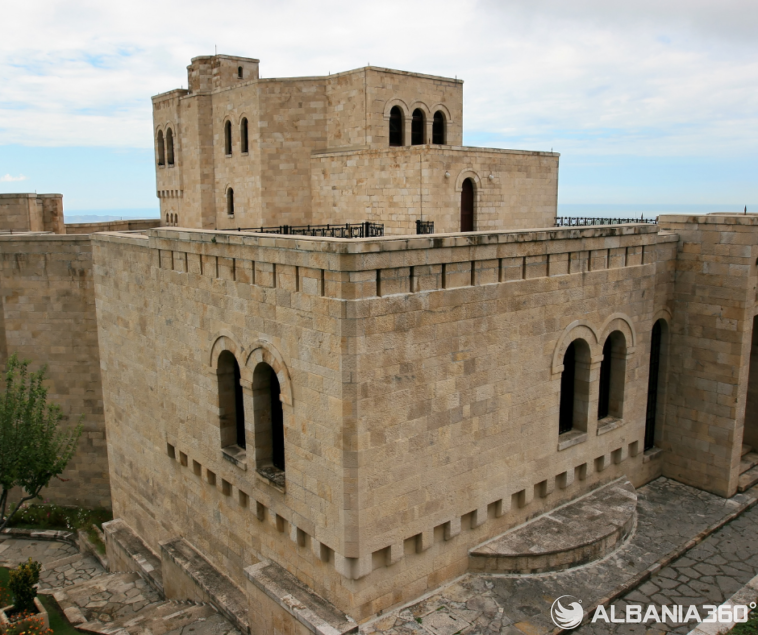 The crown of Kruja is exactly the Gjergj Kastrioti Museum, which stands proudly in front of the city and follows from above the narrative of this destination over the centuries.

It is naturally found in the heights, just like the eagles, on the edge of the rocky mountain and it welcomes and accompanies visitors, who, eager for a little history, knock on its doors.You have to walk just a few meters above the old bazaar, in the cobblestone alley and enter the narrow door that seems to transfer you back in time.

First, it appears the panorama of Fushe Kruja,Durrës, Cape Rodon and the Adriatic Sea in its tranquility. At any time of the day, this landscape is impressive. On the left is the Museum, so stoic and welcoming.Some stone steps, on the edge of whichthe red and black flag stands out, will lead you tothe main entrance of the museum.

On the facade you can see images from the battles of Kruja, where Skanderbeg standsout with his unique helmet and the horses that run in battle.The museum was built in the famous castle of Kruja, the capital of the state of Arbër and personification of the defeat of the Ottoman armies, for three times in a row, in the century. XV. In this museum are exhibited many objects, documents and original bibliographies, authentic reproductions that speak clearly about the history of the Albanian people in the century. XV and beyond.

It includes pavilions such as the pavilion of antiquity and the early Middle Ages, the pavilion of the Albanian principalities, of the Ottoman conquest and coping with this conquest, the pavilion of medieval castles, of the Albanian resistance, the chancellery of Skanderbeg, the library, the princes’ hall, and the library finally the heritage and echo pavilion. In these pavilions are exhibited objects made of ceramic, bronze, iron, copper, various facsimiles, original icons, writings, bells of 1462, original swords of the century. XV etc.

Start a historical exploration in this museum and let us know in the comments what impressed you the most in this attraction.