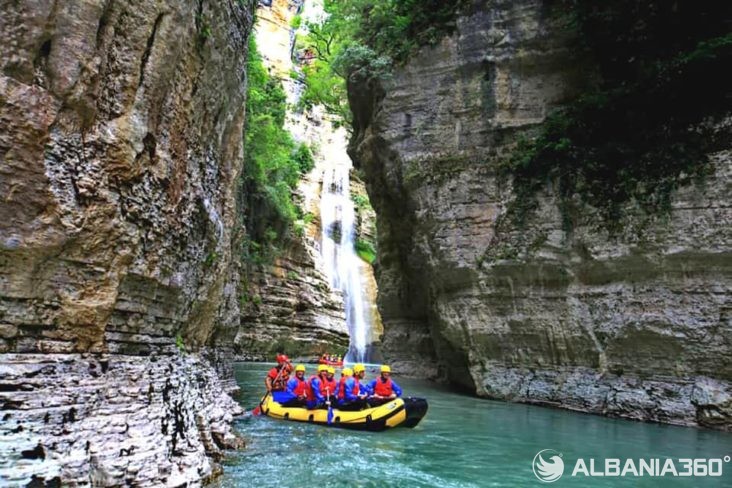 If you knew how famous is Rakia of Skrapar, you would presume that all the locals are constantly drunk and are used to live like that. Well, that wouldn`t be quite wrong, but we would have to make a decent poll to confirm the rumors. Meanwhile, why don`t you check by yourself if that Raki is the best you can find in Balkans or not. Let us know in the comments below. Make sure to write when you are sober. Thank you. (No, seriously, the moonshine of Skrapar is the best. No bias here 😉 )

However, there are a lot of other things to do in Skrapar besides drinking and eating good lamb meat. The nature is stunning and there are a few mountain peaks you would like to reach. Once you do, you would thank us for the suggestions. Here`s why you should visit Skrapar:

1. Mountain biking along the Osum Canyon

In Çorovodë, crossing the river on the opposite bank you can follow the unpaved road that connects many villages in the Osum River Valley. Going on the opposite side by mountain bike most of the trekking and staying on the unpaved road, you can reach the village of Prishta. Biking from here is difficult to reach the father mill, then to return to Çorovodë, so you might want to walk your bike, or carry it on your shoulders for the last part of the journey. From Prishta, the path is detached and then the last part of it leads to a bridge hanging on the rock, and you have to use extreme caution. PS: be careful not to crush the turtles.

Bogova waterfall appears in the lower part of Bogova village, along the road leading to Skrapar. It takes approximately 45 minutes from Berat to descend to the waterfall and its natural source. Meanwhile, along the way you can stop in some very picturesque villages that lie very close to the road. The villages of these areas are very famous for the cultivation of different fruits, especially grapes. On the Osum side you can enjoy a panorama that you will not easily forget. If you can not find the right path by yourself, ask for the locals to help you. They would guide you just for a few euros/dollars, and trust us, it’s definitely worth it!

3. Rafting and kayaking in the Osum canyons

Osum Canyons is one of those destinations that has aroused great interest among tourists and is being frequented a lot lately. It is the largest canyon and is rightly named as “Grand Canyon of Albania”. It is located in the section Çorovodë – Hambull of Osum valley and is about 8 miles (13 km) long, around 250 ft (70-80 m) deep, with a vertical slope, end The Osum River flows “playfully”. In this canyon, from the end of April to the middle of June, the rafting sport season takes place. Athletes from Italy, England, the Czech Republic, Germany and all over the world come to practice in its waters, the beautiful sport of rafting.

They are located near the Gradec Canyon, on both sides of the river, about 2 miles (3 km) from the town of Çorovoda. The tunnels have the appearance of a real underground city and the work for their construction continued for more than 17 years. These tunnels served to store large quantities of state ammunition during the dictatorship period. With the reserves inside them, in case of war, the Albanian state of the time could fight for more than 6 months. In March 1997, the Pirogoshi Tunnels were forcibly opened by locals, angered by the bankruptcy of pyramid schemes. The intervention of former military personnel and district authorities made it possible to avoid a real catastrophe as the explosion of ammunition inside the tunnels would bring unimaginable consequences.

6. The footprint of Abaz Ali

They are strange shapes, created by karst or the dissolution of limestone in water. These shapes are similar to the footprint of a horse and a stick. They are located near the village of Dhores, about 3 miles (5 km) away from the town of Çorovoda. Legend describes them as the footprints of the Saint Abaz Ali, who came to Tomor from Karbala, riding his white horse. He flew and left a trail on the board of Kajca, the other in Dhores near the canyons, from where he again flew to Mount Tomor to defeat his rebellious opponents. Bektashi believers, to calm the soul, seek the help of the trace of Saint Abaz Ali.

This cave is located only 2 miles (3 km) away from the town of Çorovoda on the right side of the canyons of Gradec. Although the inhabitants of the area had discovered this special cave in time, it was some Italian speleologists who studied Pirogoshi completely. It was 1252 meters long, 30 meters wide and 5 meters high. It has the shape of an underground labyrinth, with narrow galleries, wells and water baths. On its ceilings there are many stalactites and stalagmites that give it a graceful and attractive appearance to the eye. Pirogoshi cave is thought to have been an early settlement of the Neolithic period and beyond.

This bridge is thought to have been built around 1640, near the source of Guhak by one of the most famous architects of the Ottoman Empire Architect Kasemi, originally from the village of Grëmsh of Skrapar, this is claimed, from the name of the bridge. The Berat-Skrapar-Korça caravan road passed through this monument. This road has been very important for these provinces, as it served as an axis for the movement of people and the exchange of goods. From the construction technique, it must belong to the 16th century.

The typical dish is roasted meat, as well as in a good part of Albania, but in this area it is specified in lamb roasted in the oven and grilled, the undisputed protagonist in most of the tables set for holidays or family joys. The main meal of the day is lunch, which leaves a lot of space for meat and vegetable soups. Fresh seasonal salads (Green salads made from cucumbers, onions, peppers, eggplant, zucchini, tomatoes) accompanied by yogurt, yogurt obtained from goat’s milk, but cheese also plays an important role, most varieties common are white cheeses and Kashkaval. 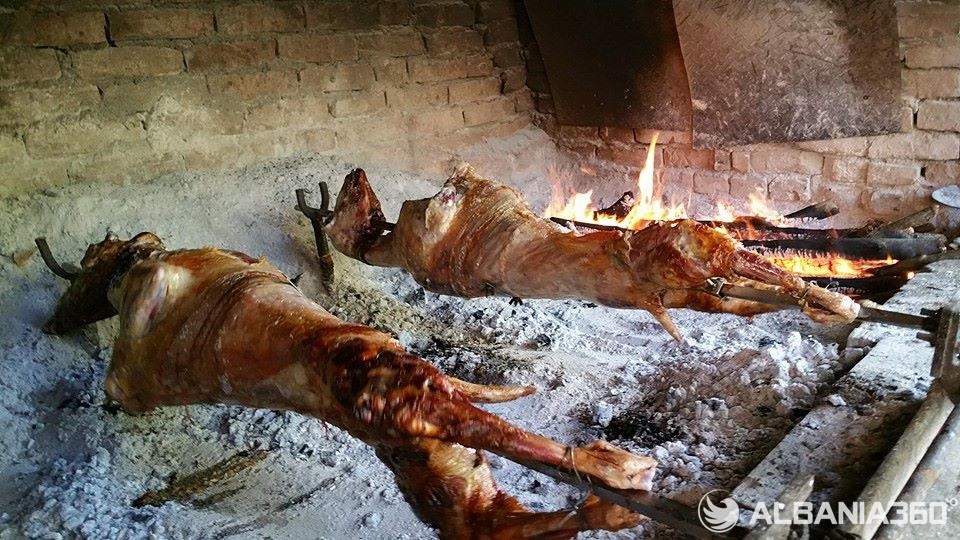 10. Make a toast with Raki (moonshine)

Dollia in Albania and especially in the district of Skrapar, is one of the early traditions with great cultural value. Dollia has the “chairman” (dollibashi) and the “secretary” (host). Skrapar brandy feels all over Albania as the best and highest quality brandy, so it is worth trying once. Keep in mind that dollia could get you drunk really quick, so be prepared.