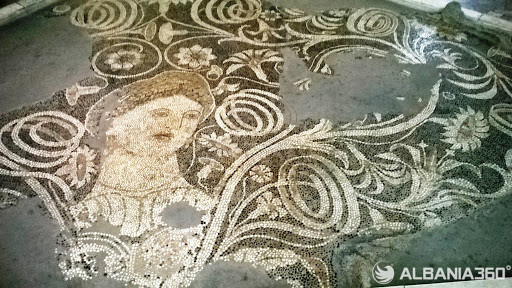 You may have heard often about Durres and its beaches, you may have landed by ferry in its port, but there is much more to discover in this city that once, in antiquity, was called Dyrrah. The city dates back to the year 490 since the foundation of the fortress of Durres was erected by the Byzantine emperor Anastasius.
Since then, this city has been a hotbed of civilization and a key trading point in the region. Nowadays, there are not many traces of this civilization, but nevertheless, some treasures of history have been able to survive.

Such is ‘The Belle of Durres’, Dea

The ‘Belle of Durrës’ is the name given to a polychrome pebble mosaic discovered in 1916 in Durres, Albania and now on display at the National Historical Museum in Tirana. As you might imagine from the name, the mosaic depicts a woman, or at least a woman’s head surrounded by floral motifs. The mosaic is incomplete and is part of a larger floor; archaeologists surmise that the room may have been part of a bath complex in a luxurious private villa. In 1982 the mosaic was moved from Durres and is now on display in the National Historical Museum in Tirana.
This beautiful mosaic is made up of thousands of small natural pebbles, graded for size and colour and then set into a wet surface of plaster or clay according to a prepared design, probably a ‘cartoon’ of actual size. Dated to the second half of the 4th century BC, it was made at a time when the art of pebble mosaic was coming to its highest point, having developed from a simple floor with embedded natural pebbles which provided a harder wearing and more waterproof surface than beaten earth.
The mosaic was discovered during the middle of the First World War when the city was occupied by Austro-Hungary. Soldiers digging earthworks in the center of the city uncovered the mosaic at a level of almost 13 feet (4 meters) below ground. The works were being undertaken in an area of Durres notable for archaeological finds, not far from where late antique circular forum and the 2nd century AD Romans baths were discovered. Following the Greek foundation of Epidamnus, the mixed Illyrian and Greek city thrived, eventually becoming Dyrrachium under the Romans, Durazzo under the Venetians and finally Durres.
Though this continued occupation is a testament to the success of the foundation and its strategic location, it means that the ancient part of the town is under the modern center of the city. Most of the archaeology under the surface of the city will never be seen, and much of it is now lost or damaged. The mosaic, luckily, was spared. It was covered over and not rediscovered until 1947, thanks to the detective work of local archaeologist Vangjel Toci.
Some Albanian scholars have attempted to identify the figure in the Durres mosaic; historian and archaeologist Dr. Moikom Zeqo, while noting the similarity with the Apulian wares, has suggested that the woman represents the Cretan goddess Eileithyia, goddess of childbirth and midwifery whereas Professor Dr. Afrim Hoti has put forward the theory that the woman may be the maiden Aura, a companion of the goddess Artemis who came from Phrygia.
Whoever the Belle of Durres may be, she is important because she is a manifestation of how the ancient city of Epidamnus was in touch with different ideas, techniques, trends and, of course, people. The pebble mosaic is a remarkable work in the Greek tradition and an example of how ‘fashions’ moved across media and space in the 4th century Greek world.