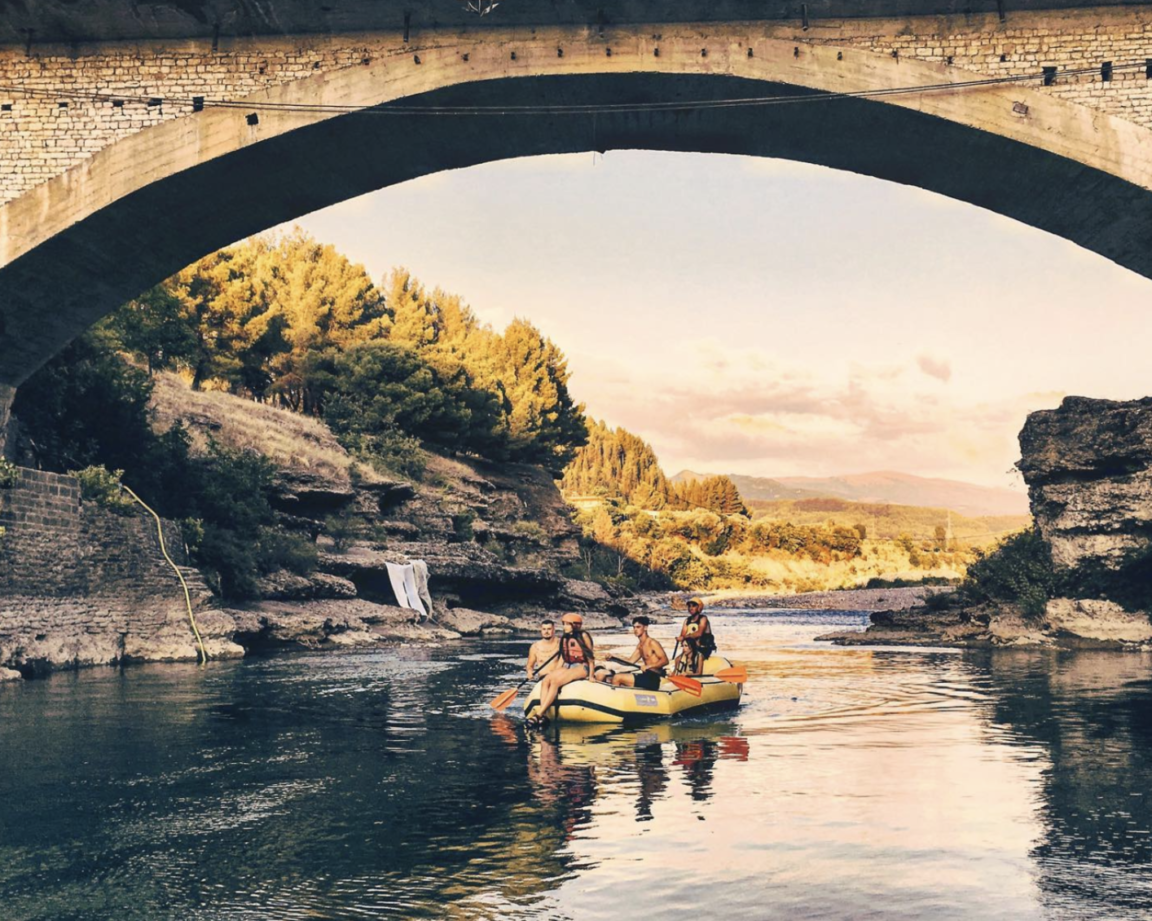 There’s a place where the cold water springs, and the northern wind blows in the summer…where the flowers grow with their beautiful and fragrant smell. We invite you to do an oxygen therapy while enjoying the best that mother nature has to offer, to enjoy real organic food, to drink and not get drunk with traditional brandy and wine, to eat unique walnut jam and not to be afraid of getting diabetes, to be adventurous with sports like rafting and mountaineering and not to risk anything, to do activities and to relax in nature with friends and loved ones.

We invite you to a place full of history, thermal curative hot springs, spectacular views, magic! This place is called Permet, a place of tradition and renewance.

Here are the 10 Top things to do in Permet

1. Rafting on the Vjosa River

Experience the adrenaline of rafting in one of the last wild rivers of Europe, which flows freely between the sweet city of Permet. Enjoy the swells of the crystal clear Vjosa river, between the canyons, islands and wonderful meanders! Before you start your trip, make sure to make a reservation for this activity because in the summer time, it might be difficult to make a last minute booking, due to the high request.

Known since antiquity, these sulfur springs, which emerge from a deep tectonic fault, are different and originate on both sides of the Lengarica canyon. Each source has different therapeutic properties for the treatment of skin diseases, stomach, kidney, rheumatism, etc. The springs of thermal waters are natural and are poured into small tubs of a precious beauty inside of which it is possible to collect even thermal mud, suitable for skin training (similar to the Blue Lagoon in Iceland). Surrounded by unspoiled nature, this place presents a unique blend between adventure history and nature. In addition to the thermal baths, there is also the Lengarica Canyon and the Kati Bridge.

The bicycle tour is one of the best opportunities to get acquainted with the tourist potentials of the country, to explore nature and to promote the cities of Albania.

Hotova Fir is located in the south of Albania, a few miles from the city of Permet, and can be considered as the natural lung of Southern Albania. With an area of ​​about 3000 acres (1200 hectares) and a magnificent massif composed mainly of Macedonian fir, this national park is one of the tourist pearls of Albania, which offers pleasant surprises in every season of the year, such as in winter, where it is covered by snow but also in summer where you can enjoy its freshness.

The canyon is located about 650 ft (200 meters) away from the thermal springs on both sides of Lengarica. The flow of the river makes on both shores there is a rich and diverse vegetation where a host of birds and wild animals, rare for the area, live. The canyon is famous not only for its natural values ​​but also for its archeological ones. Recent research has concluded that there were prehistoric dwellings in the canyon caves.

A few kilometers above its outflow in Vjosa, exactly in the baths of Benje is the Katiu bridge, a bridge of interest and relatively well preserved. Built on rocky shores it is of interest in terms of architectural composition and constructive solution.

In the Village of Frasher, Permet, you’ll find the house of brothers Avdyl, Sami and Naim Frasheri, prominent activists of the National Renaissance, which is part of the national heritage. They are well-known writers and scholars in Albania, who have dedicated their lives to patriotic activities.

Horse riding follows trails in that part of the national park, located near the Lengarica Canyon and the thermal waters, one of the most visited attractions in the Permet area. This area is known for its traditional cuisine, hospitality, characteristic villages such as Benja, Ogdunani, Delvina, Gostivishti with their stone houses, cobblestones, taps, and old churches surrounded by cypress trees.

If there’s one thing Permians never get tired of telling, it’s the types of food they produce. At any family events or else, they are the first to take out the walnut marmalade, which is filled with an almond kernel, after which the arsenal of sweets continues with watermelon, fig and orange jam.

10. Visit THE STONE OF THE CITY

It is a rocky massif along the Vjosa, 138 ft (42 meters) high and about 7000 square feet (650 square meters). The City Stone is considered the symbol of the city’s identity. Geologists say that it was detached from the Mountain of Tooth after an earthquake, while the legend tells it otherwise:
The chief of the province Premti, who gave the city its name, had built a fortress on the City Stone. Today the castle is flattened and the only thing remaining are the walls, evidence of the legend. It was the end of the 14th century. Sultan Mehmed’s army conquered Ioannina. After Ioannina, it was Permet’s turn. Friday was over, and the chief of the city was his nephew, George, who had a daughter, Diestra with a baby in her bosom. One night the Turks arrived in the city. The lord was out of it. There was only the girl in the castle. The Turks demanded the keys to the fortress and the surrender of the girl. Diestra took the cradle with the boy in his hand and jumped from the top of the rock. At the foot of the City Stone, there is a smooth stone where Diestra collided. On the stone some marks: Baby hand or cradle stripes. This is what the legend says.