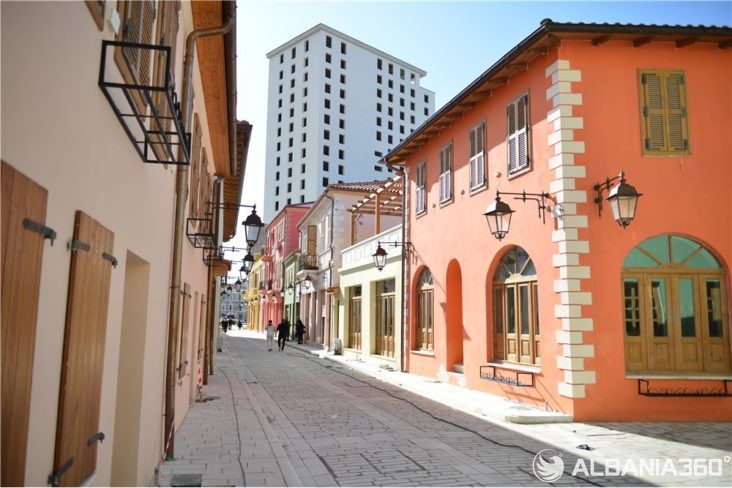 You will recall Copenhagen.
You will probably recall Amsterdam too.
Some will even feel like they are walking through “La Fortaleza” Street in San Juan, Puerto Rico.

Those buildings with sweet bright colors, lined up one after the other in a straight line, with a cobbled alley separating the two sides, souvenir shops, and a small cafe in the corner. Then you will see wooden doors and windows, honey-colored.
You will see balconies with decorated railings and vases of flowers pouring on the walls. And then you will notice behind the windows, those embroidered curtains by the local housewives.

You are in Vlora. This pleasant path that surrounds you in colors and allows you to see the gray autumn sky where birds fly and migrate in flocks, is an urban oasis. This place is today called Justin Godard Street Ensemble. This is not the first name of this street. In fact, there have been some. From 1912-1921 the street was named “Liria”.
This name has been triggered by the arrival on this road of the Independence delegates.

Before it was named “Freedom”, the street was known as the “Cafe Street”. In 1921, by the decision of the Municipal Council of that time, the street was named “Justin Godard”, in honor of the French politician of the same name, who was a welcomed politician in Albania. Every building on both sides of the Museum Road has its history, but what stood out most in terms of grandeur but also in terms of interesting events that characterize it, was the building of Swaraj.

This building was built by the Sharraj family in 1880, and was demolished 100 years later, around the 1980s. When this building was built for the first time, a sundial was mounted on its facade, which at that time was the only clock in Vlora. The house received the greatest values in 1912 when the flag was raised in Vlora, as 3 ministers were hosted there.
Also on November 27, 1912, Ismail Qemali, the leader of the Vlora government, at the same time one of the national heroes in the country, slept in this house.
At the entrance of Muze Street, there is still a one-store building, which was the first bookstore in Vlora, opened in 1936 by a group of cultured people, such as teacher Ibrahim Kushta, publicist Ibrahim Shyti, who is known as an old photographer of Vlora and as a secretary of Ismail Qemali, where he took many old photographs of Vlora.
On this street, we can not forget at all a building which around the 20s and 30s, was called “Europa Hotel”, where later around the ’60s ended up as a youth library. Also around the ’20s,’ 30s, this hotel was quite luxurious for the time, and many high personalities of the world stayed, also here the coffee parlor of Vlora and mainly the beys of Vlora drank, where 12 gold cups stood out, especially for beys. Not everyone could enter this bar. Many other historical figures are housed in the buildings of this museum street, so its sports values are great for Albanians.

Also there is a two-story building with windows from the street where Marigo Posio lived. Marigo Posio was the girl from Korca, known as the girl who embroidered the Albanian flag that was raised in the declaration of Independence of Albania on November 28, 1912. You will find this special place a few yards away from the Flag Square in Vlora. Go for a walk, get a coffee in hand and look at the houses one by one.