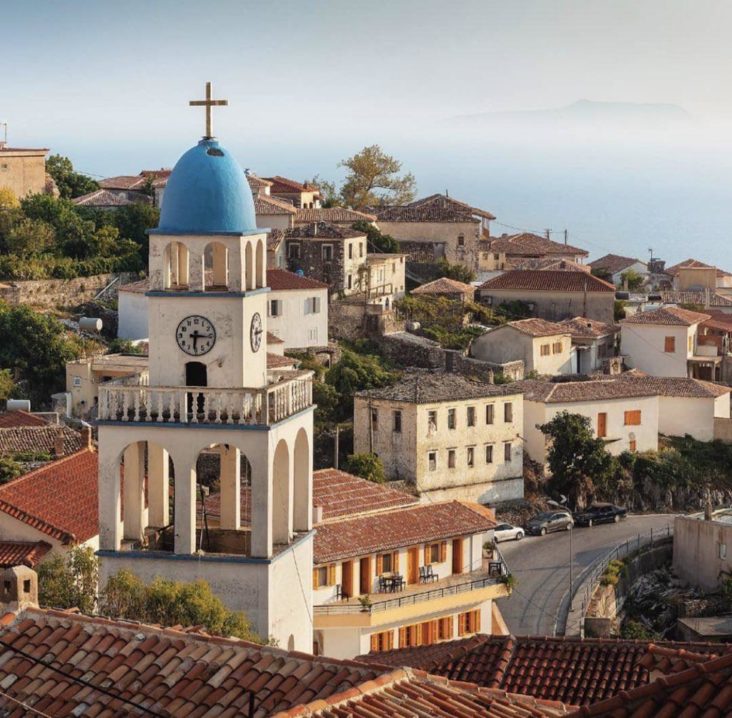 The first time you visit Dhërmi, you will know that is one of your favorite villages amongst all the rest that you have seen before. The beautiful white houses, the brown roofs, the wooden windows and of course that amazing view of the Ionian Sea, will steal your heart.
But that is not all.

Let’s learn more about this astonishing village in the South of Albania: Dhërmi village lies at the bottom of a beach more than five kilometers long, a beach which ends with a hill, on which rises the monastery of St. Theodore. It has a population of about 1080 inhabitants, who are mostly authentic with some internal emigration from the Labëria part.

Historical records suggest that this village on the Albanian coast has been continuously inhabited since antiquity. Nature is rich with various assets, such as the close presence of the Llogara mountain, the descents to the sea, the wide sandy beach, the plots with olive groves, citrus, fruits and other vegetation. It is a special sea-mountain combination.

The village consists of three neighborhoods: Kondraqa or Kallami, which is the first neighborhood for those who come from Llogaraja, followed by Gjileku and Dhërmiu -the third and largest neighborhood, which has given the name of the village. In total, the whole village has about 600 houses, of which about 300 are in Dhërmi, 150 in Gjilekë and 150 in Kondraq.

Another characteristic worth mentioning is the fact that the first school was opened in Dhërmi around 1629, to have an almost permanent school in the Greek language in 1870 and served as an education center for the entire surrounding area. Dhërmiu is especially characterized by the high number of cults of the Orthodox faith (over 30 cult objects). After Dhërmiu follows the village of Ilias, a village with few resources, to continue further with the historic village of Vunoi, which is positioned about 400 m above sea level, with panoramic views overlooking the Ionian Sea and descends to the beach of Jala.

Vunoi is considered an old settlement, probably since the century. VIII-VI BC. There are many good examples of the typical architecture of the 18th-century area, both in the dwellings and in the churches. Vunoi has also been the birthplace of many prominent scholars.

It is positioned about 400 m above sea level, with a panoramic view, overlooking the Ionian Sea and descending to the beach of Jal. There are a large number of characteristic dwellings, architecture, way of construction tradition, etc. In addition to these, we emphasize tower-type facilities, special churches, the school and the cypress tree (natural monument).