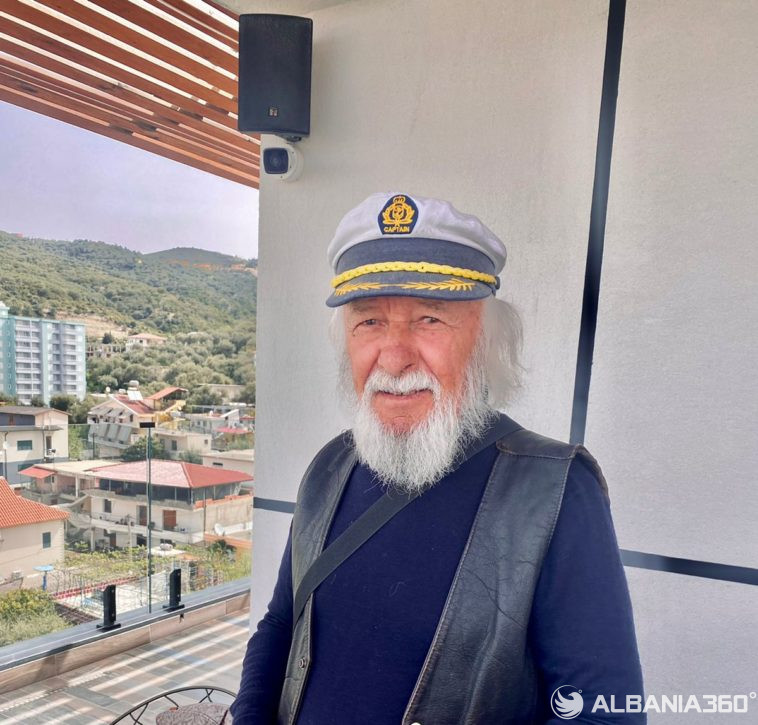 It’s the end of April and the only enjoyable thing about the sea of Vlora is the coast. At least for those that don’t dare to jump in the sea yet, like me. Anyhow, we made it to meet an aged and experienced adept of the deep waters, a fisherman of a lifetime and a sailor of tens of boats that have sailed through the winds of the Adriatic and Ionian Seas.

It would be the most unusual thing to see in Tirana, a man with a cool captain hat walking in an elevator which led to a bar, but when you’re in Vlora, by the sea, it feels relevant. However, what does take my attention is not just that hat, but the whole appearance of this man, which I can’t tell is Albanian or not. He has white hair, white beard and moustache and these deep aged eyes. His skin is well pigmented by the sun during the years and his hands look like they can give the strongest handshake. My friend gives me an awkward look about him, awkward but positively surprised. Then, we reach the sixth floor, where the bar is.

We can’t resist greeting him and it seems like he’d been waiting for such an encounter, even though it is still morning time. He orders his usual (as I was told later) shot of raki and a few pieces of lemon. “A bit too much for a breakfast”.. I suggest. “Not for my stomach” he assures.

He introduces himself as Servet and goes on telling us all about his seaside life. 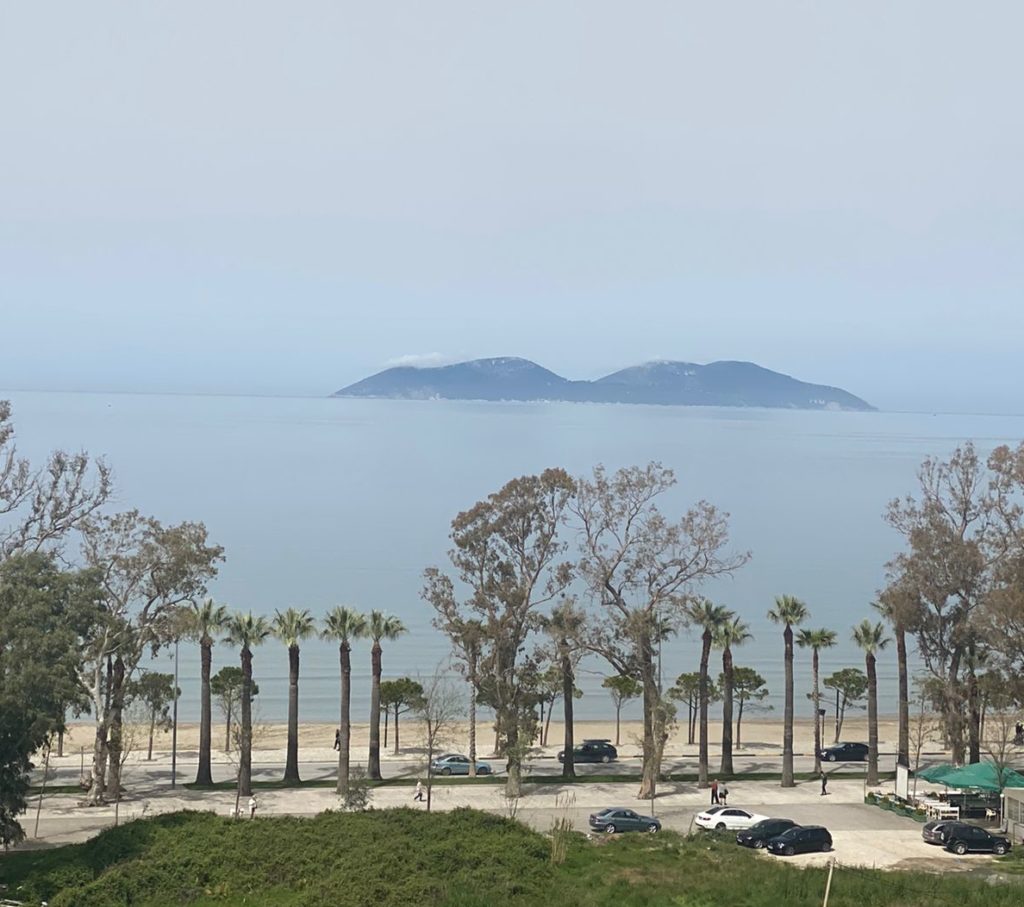 He’d been in the seas since he was 5. He doesn’t remember doing anything else in life besides sailing, fishing, and taking people in his boat for a ride or two. He knows the fishes of the sea, and the fishes of the table. He knows where to find them and how to get them. He has been living for so long amongst the fish, that he is part of their environment. I imagine he’s one of those people who can catch a fish with his bare hands, that’s how rough and strong they seem.

He has explored every inch of the Albanian Adriatic coast, going south to the Ionian Sea, he has been on the islands around and he has seen in a slow motion the change of the city, the growth, the perspective, the mistakes.

Then he starts telling me of those many times he has been risking his life out there. The freshest story is the one of the two years ago. While he was fishing in Vlora, an unexpected cyclone broke the chain holding his anchor and took him rapidly far away til the greek waters. For two days, he couldn’t fight the winds and the weather and couldn’t find his way back home. All he had in his boat to survive was a bottle of water. With a slight smile he recalls how a ferry boat went by very near and still nobody noticed him. He also tried the coloured smoke survival kit but nothing seemed to work. But God was on his side. After 48 hours in the sea, he was saved by another boat and brought home. He showed me a video of that moment and I noticed he kept staying on his boat without giving it up until he reached Vlora, and even though 2 days in the rough seas might have exhausted him, there he was at the front of his boat, standing still and straight, just like his captain hat, so proud and vigilant.

He has many similar stories to tell, recalling those til the Italian borders (the country where half of his family is now), risking his life, stories of how courageous and humble people like him work for the ones who get the credits and the money, but what impresses me, is that no matter how many places he has reached through the sea, he would always come back home and stick to his birthplace, Vlora. 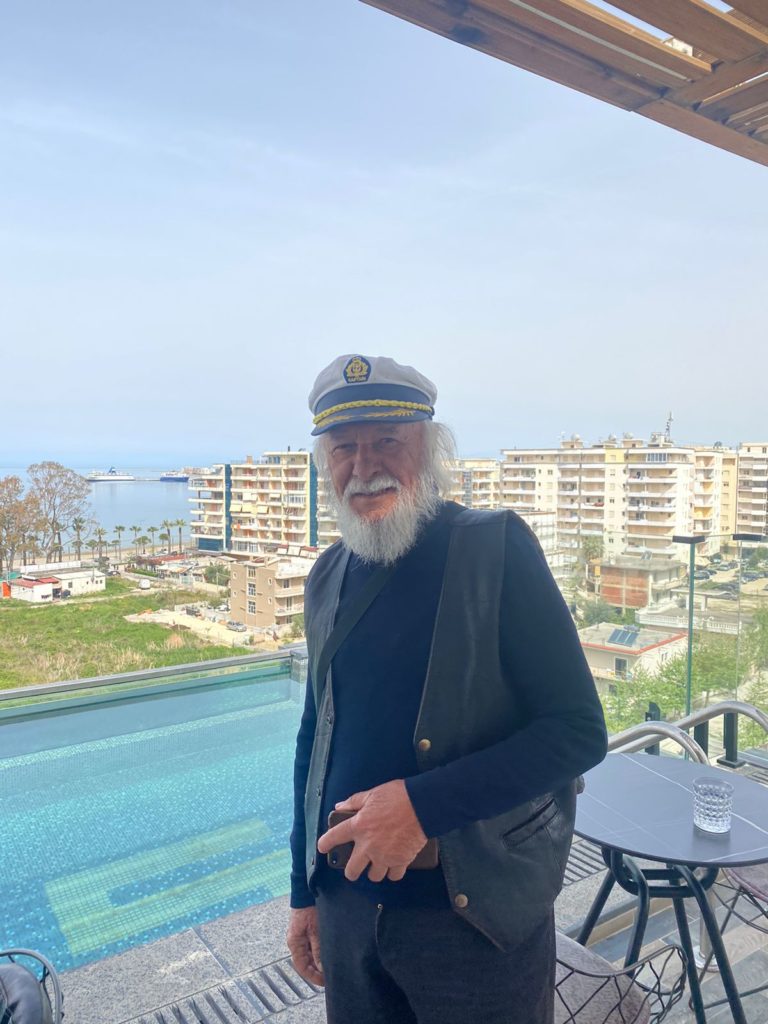 I ask him what he does now for a living and he points far in the horizon the starting point of his itinerary. As he explains, most of the summer he works with tourists taking them from the city to the island of Sazan, to explore the cave of Haxhi Alia and then enjoy the beach at the left part of the island. And while his tourists are enjoying the day, he moves aside and goes fishing, so he can come back at dusk with people and fish. He shows me a few pictures of the fish he catches and a few dishes he cooks himself, inviting me to visit his family next time, as he will cook for everyone.

I offer him another shot of raki, as I sip my coffee, and he seems content. He drinks it like water, I say to myself. However rakia hasn’t helped him to avoid rheumatism, caused by staying so much in the humidity. There should be lots of others problems he faces now, I imagine, as he doesn’t want to reveal his age. He’s that kind of proud. And I like his answer.

Although he’s been a fisherman and a sailor all this life, he has well deserved the captain hat he’s wearing, as he has belongs to the sea, as he has been serving people with fish and rides through the winds, and as silent people like him never take the right credits, so we decided to call him simply Captain Vlora!

We have little footage of this encounter, as we wanted to respect his morning ritual and not be annoying, but we promised him to revisit when the tour to Sazan Island will be possible and hopefully to show you in videos his summer adventures.

All rights reserved to Albania360°