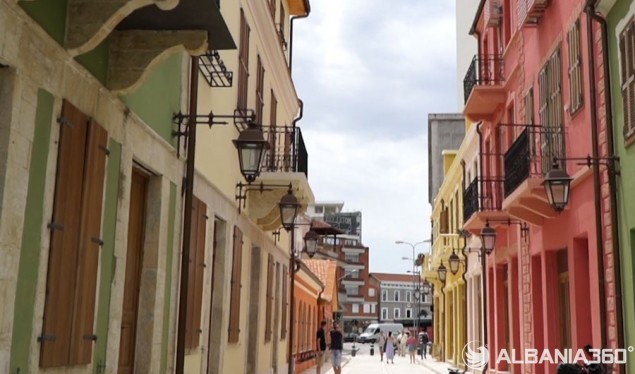 The origin of ‘Jewish Street’

The origin of the friendship between Albanians and Jews goes back centuries ago, around 600 years ago. The traces of this history have already remained in the memory of the citizens of Vlora, who preserve the best impressions of those noble inhabitants who became part of the life of the city of Vlora, until the early 1990s. A consolidated Jewish community lived in Vlora. A large part of them lived in a street, which today has been declared a cultural monument and is named “Jewish Street”. This street is located near the center of the city and has a length of about 150 ft (46 meters) and a width of 15 ft (4.5 meters). On both sides, characteristic two and three story dwellings are erected, which were built in the late nineteenth and early twentieth centuries.

The first Jews arrived in Vlora in the 15th century

According to the historian Novruz Bajrami, the first Jews in the city of Vlora came in 1430. They arrived here from Spain. According to Bajrami, in 1520, the Jewish community in Vlora was composed of 525 inhabitants, out of 4000 that the city had in total. But for the historian Bardhosh Gaçe, the arrival of the Jews in the city of Vlora is a little later. According to him, it dates back to 1490. In this period, which coincides with the reigns of Ferdinand and Isabella, Catholic Spain expelled the Sephardic Jews from its territory. Some of them came to the Balkans and many of them arrived in Vlora. In the years 1519-1520, Vlora had become a kind of center in the region for the Jews. In fact, at that time, in the city there were around 609 houses that belonged to the Jews, who had built somewhere near the present center of the city of Vlora, a cult object, the synagogue, which, according to historians, existed in Vlora until the First World War, when it was destroyed and no trace of it remains today, unfortunately.

The second wave of Jewish arrivals

Another wave of arrival of Jews in the city of Vlora was recorded in 1850. They arrived here from Ioannina and Preveza (Greece). In this way, the Jewish community in Vlora was consolidated until the eve and during the Second World War, which marked the last moment of the arrival of Jews in Vlora. Their arrival was linked to attempts to escape persecution and extermination by the German Nazis, who pursued anti-Semitic policies. There are no exact figures of the number of those who came to Vlora in this period. The World War 2 turmoil that Albania was in, plus the conditions in which the Jews traveled and took refuge in Vlora, made it impossible to record statistics. The official local Albanian structures of that time in Vlora, according to the researcher Fari Shaska, did not cooperate in this regard with the occupying German authorities, on the contrary.

No Jew surrendered to the Germans