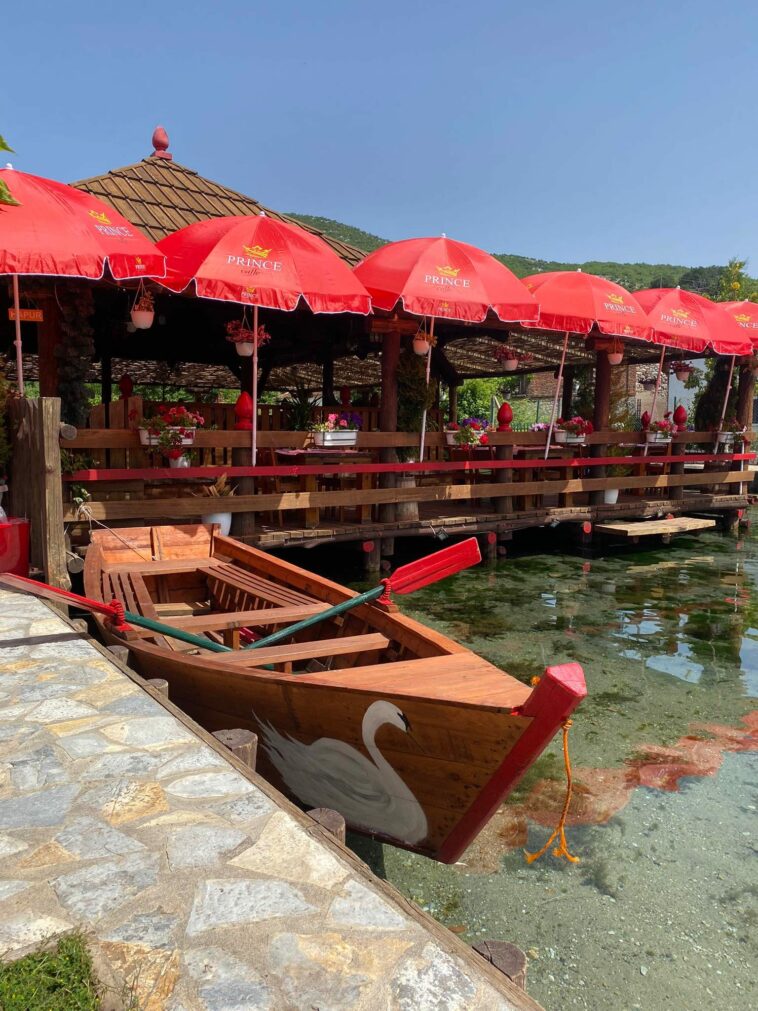 Tushemisht, Pogradec ©Albania360
Albania is a treasure of nature and stunning landscapes. You will see them as you walk through the most beautiful villages from North to South. We selected these 10 destinations which are a must visit when you travel in the land of eagles.
From Thethi to Dhermi, in summer and winter, each of them is an invitation to encourage you to touch these destinations up close.

The village of Theth is located northeast of the city of Shkodra, in the so-called alpine subregion is located the administrative unit Shale. This unit has 11 villages under administration, including Theth village. The village of Theth is located further north of the Shala valley, in the middle of the Albanian Alps with a rare beauty. The village is included in Thethi National Park, as the most attractive natural asset in Shkodra Region and beyond which lies between the block “Bjeshkët e Nëmuna” in the west, and the block of Jezerca in the east.

Petrela is mentioned since the 11th century, in the battles between the Normans and the Byzantines, considered as Petrula, by Ana Komnena (1083 – 1153). This identification was made by A. Boue, who mentions Petrela two more times in his study. The name given by Marin Barleti, the prominent historian of the century. XV, has made Petrela as “oppidum inexpngnabile” (impregnable city) shows that Petrela at that time had acquired the features of a small town, equipped with external perimeter walls. You can freely visit the castle on top of the hill without any fee, every day of the week. After you park the car at the centre of the village, you will need to walk a few minutes to the entrance of the castle and then step up a few stairs till the top of it. The activity is doable for everyone but you should be careful if your kids are visiting the castle too, as the path is arrow and there’s no fence on the side.

he gentle, friendly and hospitable nature of the inhabitants of Permet has remained the same as before. In addition to the sweetand warm welcoming, the good food of the area, the typical sweets, jams and liqueurs, the winter in Permet is also warm if you visit the thermal baths and if you bathe in the warm and curingwaters. For those of you missed that it so far, March and April are still a good time to visit the city of Permet and the village of Benje, to enjoy the thermal baths, to walk on the Katiu Bridge and to explore the Lengarica canyons. If it sounds interesting for you, this is the blog you should read before visiting Benje, Permet!

Voskopoja village is part of the Administrative Unit of Voskopoja, Municipality of Korça. It is located 185 km away from Tirana and 20 km away from Korça. Voskopoja is a cultural and historical place. The foundation of the village dates back to 1330, according to the archives found in the Monastery of St. Prodhom. The greatest period of development of Voskopoja was in the 1760s, during which Voskopoja was a center of civilization, academy and library. During this time 25 churches were also built (with frescoes and special paintings). Seven of them continue to exist today and attract many tourists

Tushemishti offers various facilities, bars and small restaurants as well as inns to be accommodated. The village is on the shores of Lake Ohrid, so it remains a popular destination for those who prefer the tranquility of the lake. The village itself has approximately 480 inhabitants. It is located 133 km away from Tirana and 6 km away from Pogradec. You can also easily visit it by bicycle or walking along the lakeshore. There are three natural monuments in Tushemisht: Driloni Spring, “Rrepet e Tushemishtit”and Najazma Cave. A great destination for this summer as it is so fresh and enjoyable any time of the day.

Dardhe is distinguished for its natural, attractive and diverse landscape. In Dardhe you can enjoy the wonderful views of nature and explore the rich nature in all seasons of the year. The climb to the village of Dardhe is also a beautiful landscape. In the winter season Dardhe with its slopes is an ideal place for ski lovers. The ski slope is in full function, and is today one of the most attractive winter spots of Dardhe. During the summer, Dardhe is a perfect getaway from the very hot days in Albania. The cultural heritage is rich -the architecture of the houses built of stone with characteristic tiled roofs, etc. Also important is the Dardhe Museum (Sotir Pan’s House). The ethnographic and spiritual heritage consists of the characteristic pear dances and folk costumes.

The village of Sotire is located as soon as it leaves Gjirokastra and follows the national road to the customs of Kakavija, at the end of the state border, lies the village of Sotire part of the Municipality of Dropull with many beauties. It is an important ecological village and with a rich but unexploited terrain, which offers incentives for a special way of vacation and entertainment as well as many natural activities in all seasons of the year. The visitor can take all kinds of walks, such as walking, cycling, horseback riding and in order to enjoy the curiosities and natural monuments such as the “Fir of Sotira” which are numerous and amazing and considered as pearls of Albaniannature. Hydrographic, eco-tourist, cultural wealth increase the values of the village as they also have scientific values. Around Sotira there are six picturesque villages such as Krioneri, Selio, Llongo, Koshovica and Lovina, which add their tourist value with organic products.

The village of Zvërnec is located in the northwestern part of the city of Vlora, only 8 km away. The village is divided into two parts; Old Zvërnec, which lies in the eastern part of the hill; and the new Zvërnec,in the western part, which can also be called the tourist part of Zvërnec, because mainly the buildings are used for tourist purposes. It is almost completely surrounded by the waters of the Narta lagoon and the waters of the Adriatic Sea, with a coastline of 10.5 km. The hilly relief intertwined with the lagoon, form special landscapes, which make Zvërnec an extremely beautiful place, with a high tourist perspective. It has a population of about 1250 inhabitants, most of whom are currently in emigration.

The village of Lukove is located in the southwest of Albania, lies on two hills covered with olive and orange plantations, at an altitude of 150 m from the sea and on its wide coast shelters a large number of beaches. It has a population of about 3000 inhabitants. It is not physically connected to the beach, but it is not far from it. Lukova is one of the coastal villages of Himara which has preserved almost the same urban characteristics as other villages of the province. Narrow streets, of medieval type and character paved with stone cobblestones, on both sides of which rise the steam of houses. During the socialist period the village was terraced and this landscape stands out even today.

Dhermi village lies at the bottom of abeach more than five kilometers long, a beach which ends with a hill, on which rises the monastery of St. Theodore. It has a population of about 1080 inhabitants, who are mostly authentic with some internal emigration from the laberia part. Historical records suggest that this village on the Albanian coast has been continuously inhabited since antiquity. Nature is rich with various assets, such as the close presence of the Llogara mountain, the descents to the sea, the wide sandy beach, the plots with olive groves, citrus, fruits and other vegetation. It is a special sea-mountain combination. 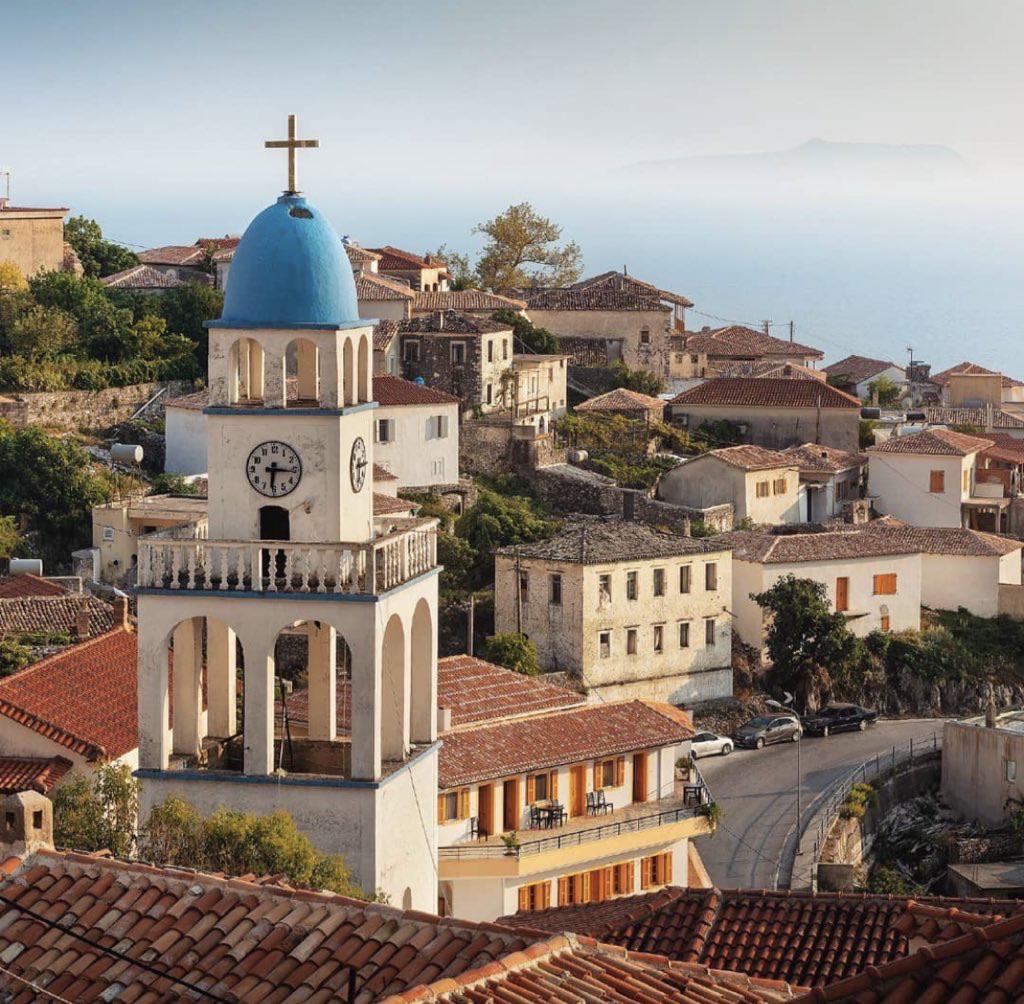